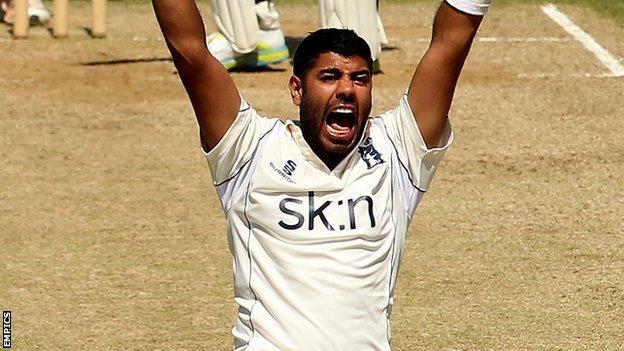 The Bears resumed on 19-3 and were indebted to Rikki Clarke's 61 as they limped to 132 all out, Chris Russell taking 4-43 on his Championship debut.

But Worcestershire were then skittled for 145 in their second innings as spinner Jeetan Patel took 4-42.

With Durham winning it will be difficult for Worcestershire to escape the drop if they don't win this one, having dominated the first innings

Varun Chopra will resume in the morning on 46 not out, with former captain Ian Westwood unbeaten on 32.

Their opening stand chasing the biggest total of the match was in contrast to the Bears' first innings when they were bowled out for their lowest total in two years.

They were left reeling by Russell, who, after picking up his first wicket on Wednesday evening, took three more in his first eight overs, before Clarke's counter-attack.

But Worcestershire, having established a 114-run first-innings lead, lost first day century maker Phil Hughes to a third-ball duck and subsided, despite 39 from Vikram Solanki and Matt Pardoe's 30.

Patel mopped up the tail to finish with match figures of 8-114 in his last championship appearance before linking up with New Zealand for two Tests in India, while Keith Barker finished with 3-21 and Chris Wright claimed his 200th first-class wicket.

"Warwickshire fought back well in the last two sessions, but Worcestershire's lower order have been poor in this game, losing the last five wickets for seven runs in the first innings and the last six for 24 in the second.

"Another 25 runs in both innings would have left the Bears with over 300 to win.

"With the bounce getting lower and less predictable that would have been a lot to get, maybe 260 will be anyway, although the Bears' openers made it look easy.

"Russell, on his debut, bowled superbly, but found it harder in the second innings and Solanki once again proved his worth in the middle order.

"With Durham winning it will be difficult for Worcestershire to escape the drop if they don't win this one, having dominated the first innings."