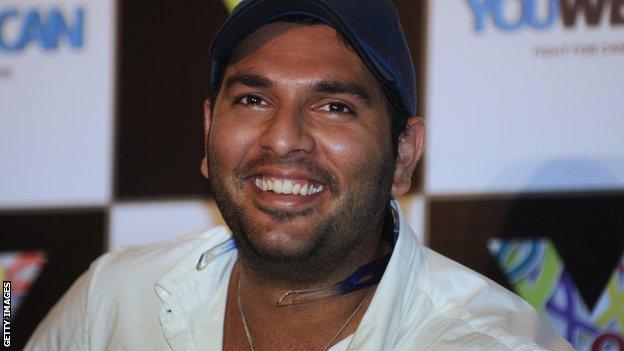 Yuvraj Singh is in India's ICC World Twenty20 squad following a return to fitness after a battle with cancer.

He has also been selected for a home T20 series against New Zealand as a warm-up for the World Twenty20, which begins in Sri Lanka on 18 September.

"Yuvraj Singh's return to the national squad will gladden India's cricket fans. Commentators have gone ecstatic describing what they are calling a heroic comeback. It is, in many ways, India's Lance Armstrong moment, when one of its most talented sportsmen has returned to the national team after battling cancer."

All-rounder Yuvraj, 30, last played for India in November 2011 before having treatment for a rare form of cancer.

"We are very happy that Yuvraj Singh has been declared fit," said chief selector Krishnamachari Srikkanth.

Left-hander Yuvraj hit six sixes in an over off England seamer Stuart Broad on the way to India winning the inaugural World Twenty20 tournament in South Africa in 2007.

He was player of the tournament as his country won the 50-over World Cup last year, with his last limited-overs game being the final against Sri Lanka, although he featured in three Tests later in 2011.

"He is a very crucial factor. If he gets going, he can win matches single-handedly. Don't forget he was the man of the series in the 2007 [Twenty20] World Cup and the 2011 [50-over] World Cup," added Srikkanth.

"He fought his way back and we really appreciate the kind of effort put in by Yuvraj Singh. He will be a great factor and it's good to see him back in the team."