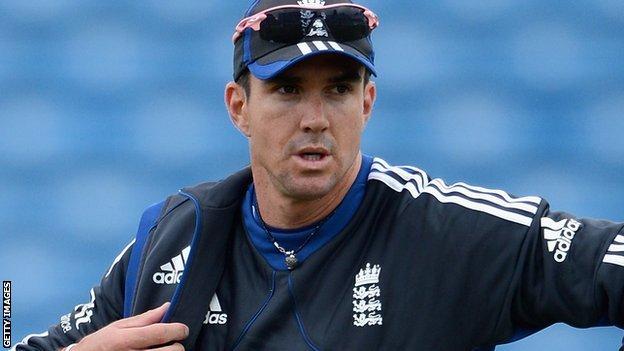 The text messages sent by England batsman Kevin Pietersen to members of the South Africa team were "banter", according to the Proteas team manager.

Pietersen was dropped for the third Test for failing to confirm that the messages were not derogatory towards England players and management.

"Text messages were sent, but it was banter," said Dr Mohammed Moosajee.

Moosajee said the texts were not sent to Dale Steyn and AB de Villiers, but did not reveal the recipients.

14 July 2012: Hints at returning to all forms of cricket providing the schedule is right

20 July 2012: Told by players' chief Angus Porter he must commit to all England matches if he is to return

9 August 2012: A parody Kevin Pietersen account on Twitter is closed - Pietersen felt his team-mates may have been behind it

11 August 2012: Pietersen springs a surprise, announcing his commitment to all forms of England cricket in a YouTube interview

Initial reports suggested that Steyn and De Villiers, both of whom have been team-mates of Pietersen in the Indian Premier League, received the texts during the second Test at Headingley.

"Allegations that Dale Steyn and AB de Villiers were the recipients of the texts are unfounded, and until such time that the allegations are met with the correct facts and evidence, we shall not comment," added Moosajee.

"This is the last time that management or the players will comment on the issue and our focus moving on is the team's preparation and how we plan to go about winning the next Test match at Lord's."

After being named man of the match for his 149 in Leeds, Pietersen hinted that the third Test at Lord's could be his last, before retracting his threat to retire in a video posted on YouTube on Saturday.

However, the England and Wales Cricket Board wanted assurances that the 32-year-old had not sent "derogatory" text messages before he could be selected for the final Test, which England need to win to avoid being replaced by South Africa at the top of the world rankings.

Sunday's squad announcement was delayed by six hours in order for the dispute to be settled, but Pietersen was eventually replaced by Yorkshire's Jonny Bairstow.

England cricket managing director Hugh Morris said: "It was agreed that a number of actions needed to be completed to re-engage Kevin within the England dressing room.

"A fundamental item was to confirm publicly that no derogatory texts had been sent by Kevin to the South African team. This has not been forthcoming despite clear timelines being set to allow the selectors to pick the squad for the third Test match."

However, Moosajee has claimed that texts were not of a derogatory nature and said that the ECB has not made a formal request to see them.

"There have been untruthful allegations in the media implicating members of our squad in the current issue between Kevin Pietersen and the ECB," he said.

"The ECB has not made a formal approach to see the text messages as is currently being reported in the media.

"This internal issue between Kevin Pietersen and the ECB has been publicised for weeks even before we arrived in the UK, and we do not want to get ourselves involved in an issue that has nothing to do with us."