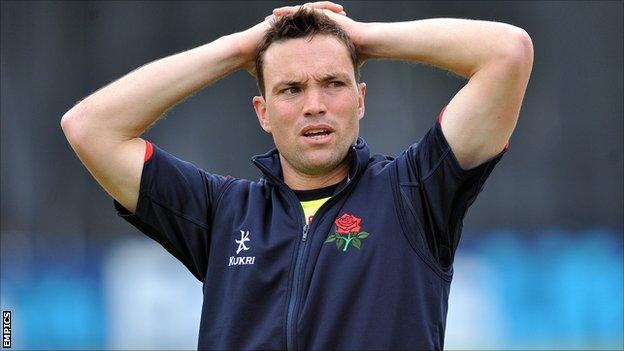 Coach Peter Moores says the decision to leave opener Stephen Moore out of the side is an attempt to freshen up Lancashire's batting line-up.

Luke Procter has been selected ahead of Moore, who has yet to score a Championship half-century this season, for the game against Worcestershire.

"In the Championship, he just hasn't been able to get the scores."

"You feel for players when their form goes away and it always seems that things don't go your way.

"I think it was time to freshen things up a bit. Stephen understands the situation and if you're not getting wickets or runs, you're under pressure as a player.

"The player's challenge is to deliver. It doesn't mean we don't like the player, it's just the reality of picking what we think at the time is the best side."

The first day of the match at New Road, between the two bottom sides in Division One, was abandoned without a ball being bowled because of rain.

Meanwhile, Lancashire's final County Championship game of the season against Surrey, beginning on Tuesday, 11 September, has been switched from Old Trafford to Aigburth.