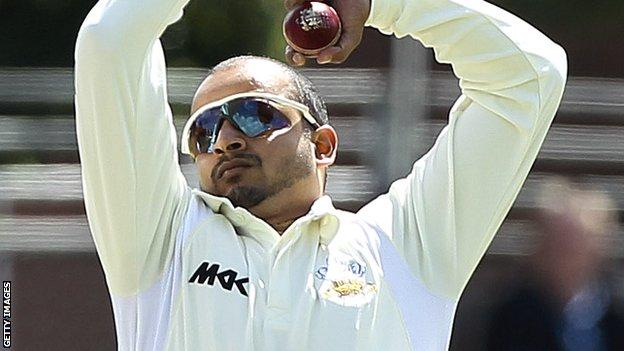 Murali Kartik took five wickets to bowl Surrey back into their Division One County Championship match with Middlesex.

Surrey then closed two runs behind on 86-1 with Rory Burns unbeaten on 40 and Arun Harinath 39 not out.

"Surrey will be pleased with the way they have got themselves back into the game.

"Murali Kartik enjoyed his first bowl in the Championship at the Kia Oval this season and kept Middlesex's lead down to 88.

"It could have been fewer runs had it not been for an excellent last-wicket stand from Toby Roland-Jones and Tim Murtagh.

"Rory Burns and Arun Harinath then batted extremely well in the final session sharing an unbroken second-wicket stand of 73."

"Surrey have turned the game with a brilliant fightback, led by their spinners Murali Kartik and Gareth Batty, leaving Middlesex concerned about a run-chase against the pair.

"Kartik's five wickets looked inevitable after a threatening spell on the opening evening and the visitors' mid-innings collapse was thanks largely to the pressure built by the Indian slow left-armer.

"The final-wicket stand for Middlesex looked to have added another twist to the game, but the hosts batted far better second time around.

"Young spinner Tom Smith may be required to add a threat or control on the third day, but it's the more senior spinners from Surrey that are likely to be have the biggest say if a target of 180 or above is set."