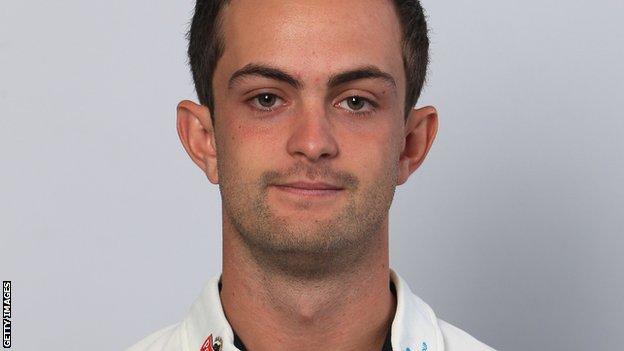 Youngster Neil Pinner scored a career-best unbeaten 79 to rescue Worcestershire in their Division One basement clash with Lancashire.

Pinner, who was out for a duck in his only other first-class game over a year ago, put on 111 for the sixth wicket with fellow 21-year-old Joe Leach (46).

The home side were on 219-6 when bad light ended proceedings early.

Both Pinner and Leach are playing in only their second Championship game, but their partnership has given Worcestershire hope of posting a first-innings total of more than 300 for only the second time this season.

"A pretty even contest after the second day, which is effectively the first day of this bottom-of-the-table clash.

"Lancashire will have been delighted with the start they made. Putting the home side into bat, they rattled through the Worcestershire top order.

"They probably had thoughts of bowling them out for less than 200 at one stage, but top marks to Neil Pinner for his unbeaten knock.

"Lancashire will be grateful to Ajmal Shahzad who was able to conjure up some extra pace to comprehensively bowl Joe Leach, and give them some hope that they can wrap up the innings early on Friday."