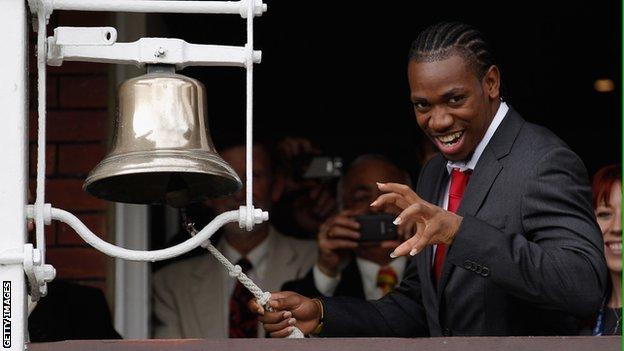 Jamaican sprinter and triple Olympic medal winner at London 2012 Yohan Blake believes he is a "better cricketer" than he is a sprinter.

The 22-year-old was a guest of honour at Lord's for the first day of England's final Test with South Africa and rang the bell to start play.

"I love cricket, more than I love athletics," he told Sky Sports during the tea interval.

He also revealed the chance of playing Twenty20 is a "real possibility".

Blake was second best to his friend and training partner Usain Bolt in both the 100m and 200m at the Olympics before the duo combined to help Jamaica take gold in the 4x100m relay and break the world record.

He admitted he still plays competitively for Kingston Cricket Club and said both he and Bolt would love to play in the Twenty20 Big Bash League in Australia.

"It is a possibility and definitely one I hope comes true," said Blake.

"I practise at home because I have a bowling machine, which I set to 90mph because I like the speed."

Bolt previously stated he wanted to turn out for the Melbourne Stars later this year, after he was approached by former Australian bowler Shane Warne, and now the Sydney Sixers are hoping they can sign up Blake.

"For one he is a great athlete, and he would be a marketer's dream, but from all reports he can actually play cricket and that's better than anything else," Sixers chief executive Stuart Clark told the Sydney Daily Telegraph.

"If he can do what he says he can do, and I have no reason to disbelieve him, Yohan would be a marquee player for me to sign. I would definitely be considering it."

As well as practising his batting on a regular basis Blake, who beat Bolt in both the 100m and 200m in his country's Olympic trials in June, said his bowling was not bad either.

"I bowl around 85-90 mph, which is definitely quicker than Usain," said Blake, who is nicknamed "the Beast".

"He would probably get more bouncers than me because he is taller but I am definitely faster than him.

"I would like to see T20 as an Olympic sport and I would definitely want to play in that, I could do that as well as run the 100m, 200m and the relay."