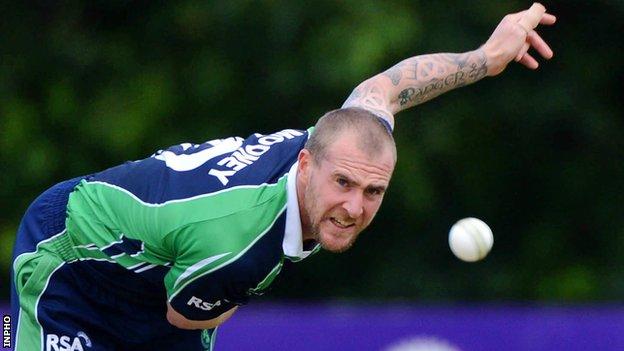 Ireland's ICC World Twenty20 hopes have received a blow after John Mooney was ruled out of the tournament which starts next month.

All-rounder Mooney, 30, has sustained a finger injury which will prevent him from playing for three months.

Tim Murtagh and Max Sorensen will make their tournament debuts for Ireland while Niall O'Brien is included after missing the qualifying event in March.

The Irish selectors omitted O'Brien for the qualifiers after he did not make himself available for all of the Kenyan tour which took place prior to the tournament because of his Bangladesh Premier League commitments.

Boyd Rankin is also named in the 15-man squad in what will be his final competition for Ireland before he switches allegiance to England at the start of next year.

Ireland's Group B fixtures see them facing Australia in Colombo on 19 September before taking on the West Indies in the Sri Lankan city five days later.

Mooney fractured his finger and suffered tendon damage while playing a recent game for his club North County.

"He's been a major part of the team for the last three or four years and it's disappointing we have to go without him," added Simmons.

Mooney has emerged as a key player for Ireland in recent seasons and played a vital innings in last year's shock World Cup win over England.

Despite Mooney's absence, Simmons has been able to name an experienced squad with only Murtagh, Sorensen and Thompson not having represented the Irish in either World Cup or World Twenty20 tournaments.

"That for me is the good thing. It's good for the younger players who will learn how we do things and how we proceed at tournaments," added Simmons.