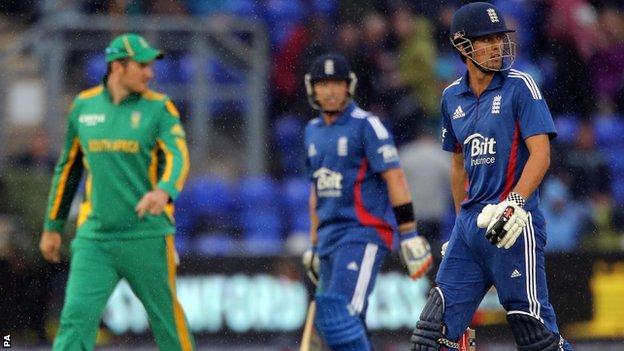 Rain forced the first one-day international between England and South Africa to be abandoned after only 5.3 overs were possible in Cardiff.

South Africa won the toss and elected to field but play only started at 15:00 BST with a reduced 24-over game.

After one wide was bowled, more rain reduced the game to 23 overs per side.

Ian Bell hit two sixes in his 26 not out from 18 balls as England progressed to 37-0 before the rain returned and this time, no resumption was possible.

The "no result" means England remain above the Proteas at the top of the International Cricket Council's one-day rankings table.

The rain began to fall shortly before the scheduled start time of 10:15 BST, and the game finally got underway at the fifth attempt at 15:00.

After another brief interruption, a 23-over match commenced only 20 minutes before the cut-off time off 13:32.

England could only score four runs off the first three powerplay overs, but Bell then stepped up the scoring rate as he and captain Alastair Cook hit 12 from left-arm seamer Lonwabo Tsotsobe's second over and 16 off the final over of the powerplay.

Bell, who is not in the England squad for the ICC World Twenty20, hit two fours and two sixes in his 18-ball innings, the pick of which was a straight hit six over mid-off off the bowling of Morne Morkel.

The second game of the five-match series is at Southampton on Tuesday.