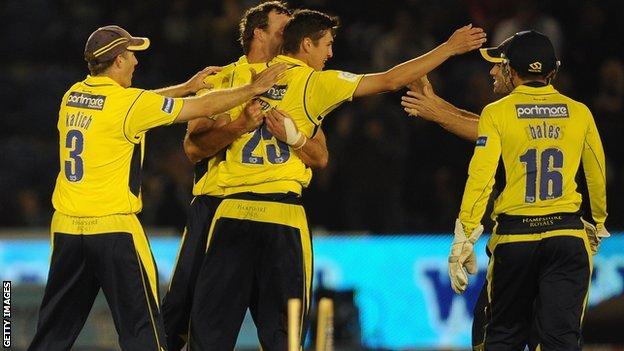 Chris Wood believes Hampshire can dominate English cricket after they won the domestic T20 title for the second time in three years.

Wood, 22, took three wickets in the last over as

"We're hungry and not going to settle for this so hopefully we can win two or three trophies this season," he said.

"To be in finals day three years in a row is a revelation in itself and to win two out of three is unbelievable."

Wood, who made his maiden first-class century in Hampshire's County Championship game against Leicestershire on Friday, was given the responsibility of winning the final in Cardiff for his side.

Yorkshire started the last over needing 14 runs for victory but Wood handled the pressure by taking the wickets of Tim Bresnan, Rich Pyrah and Azeem Rafiq.

"I've been training all summer and all winter to bowl the last few overs in those situations," added Wood.

"I knew if I landed a perfect yorker then they would not be able to hit it out of the ground."

Hampshire, who also won the T20 title in 2010, are second in Division Two of the County Championship and top of their group in the CB40, one win away from reaching the semi-finals.

Their success in Cardiff has also seen them claim a spot in the qualifying phase of the 2012 Champions League T20 in South Africa in October.

This year will be the first time Hampshire have played in the competition as no English sides were involved in 2010, because of a clash with the end of the County Championship season.

A good performance in the qualifying tournament will take Hampshire into the main Champions League event, where they will be up against teams from Australia, India and South Africa.