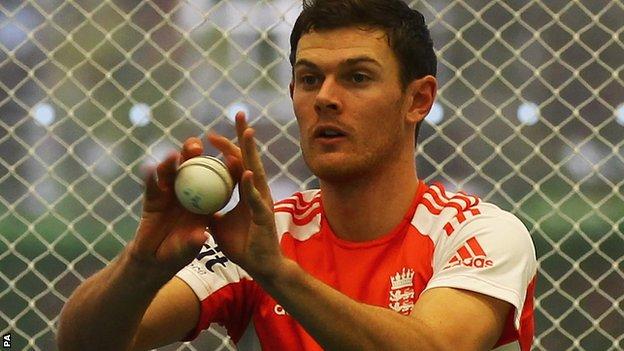 Glamorgan have announced James Harris will be leaving the county at the end of the season.

The 22-year-old has rejected an offer of a "substantial contract" and is expected to move to Nottinghamshire.

The England Lions seamer has taken advantage of a clause in his contract that allows him to be released if the Welsh county are not in the top flight.

"James Harris will be leaving the county at the end of this season," said Glamorgan in a statement.

"Over the past few weeks, the club have held a number of meetings with James to discuss his future career, which culminated in the club tabling a substantial contract offer to retain his services.

"Sadly, this offer was not accepted and James will now be leaving the club.

"Glamorgan Cricket would like to thank James for his outstanding contribution to the club since making his debut back in 2007.

"He is a talented young cricketer and departs with the club's best wishes. Like all other cricket supporters, we hope that he will be able to fulfil his England ambitions in the near future."

Harris recently conceded he may be forced to leave Glamorgan, who are one from bottom in Division Two of the County Championship, to achieve his ambition of international honours.

"I have to decide what is the best option, but this place is in my heart and I would love to stay and see Glamorgan successful."

A number of counties had shown an interest in Harris, but he is expected to accept an offer from Division One side Notts.

"Without knowing the facts, I think James has got most of Division One after him.

"He'll probably sit down over the next couple of days, as I understand it, and decide which county he is interested in joining.

Harris enhanced his growing reputation with a six-wicket haul against Australia A at Edgbaston earlier this month, watched by England selectors Geoff Miller and James Whitaker.

That performance was in stark contrast to his season with Glamorgan, which has seen him take 10 Championship wickets to date.

He missed the first month of the campaign after having a double hernia operation in February, an injury that forced him to miss England Lions' winter tour.

Harris is in his sixth season with Glamorgan after making his first-class debut aged 16. He reached the 100- and 200-wicket milestones quicker than any bowler in the county's history.