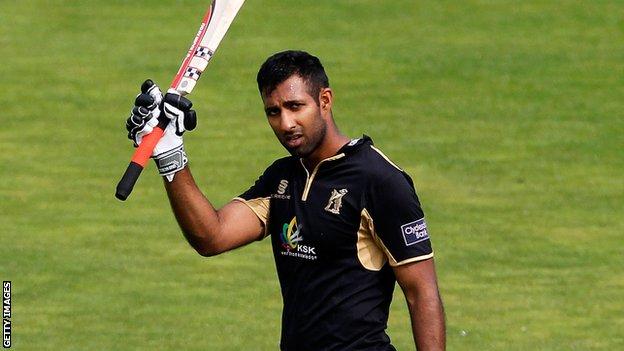 Varun Chopra struck a magnificent 110 as Warwickshire defeated Lancashire by 23 runs at Old Trafford to reach their second CB40 final in three years.

No-one else passed 20 as Ajmal Shahzad took 3-52 but Lancashire then lost both openers cheaply to veteran Neil Carter.

The Red Rose county left themselves too much to do after slumping to 90-5 in a game in which they needed at least one member of their top order to play a substantial innings to keep them in the hunt.

Ashwell Prince's 26 was the biggest contribution among the top five and but for Horton's busy, well-judged knock, which included seven fours, they would have struggled to take the game into the final over.

The opening overs of their reply were in marked contrast to the start of Warwickshire's innings when Chopra and Porterfield went along at a healthy rate against the seamers, although having to summon keeper Richard Johnson from a league game after Tim Ambrose suffered a thigh injury in the warm-up was an unwanted disruption to their plans.

It was only the introduction of spin which checked Warwickshire's progress, with left-armer Gary Keedy accounting for Porterfield and Bears skipper Jim Troughton (11).

Darren Maddy's departure, caught off Shahzad for 18 in the 33rd over, left them on 186-3 and there was still work to do if the visitors were to post a potentially match-winning score.

However, Chopra stayed until the penultimate over, hitting a six and nine fours in his 124-ball innings before he holed out at long-on off Shahzad, and Paul Best and Ian Blackwell collected 10 from the final six deliveries to leave Lancashire a testing run-chase which, ultimately, proved beyond them.

Warwickshire will play Hampshire in the final at Lord's on 15 September.