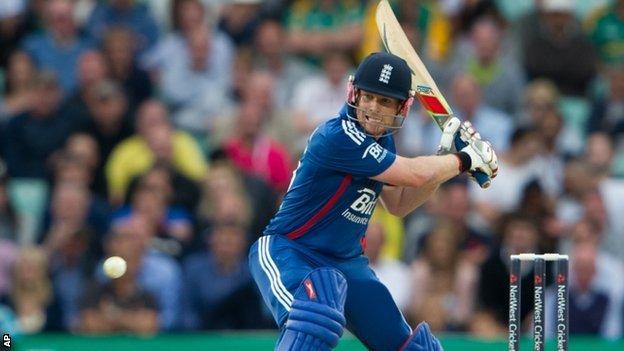 James Anderson took 4-44 and Jade Dernbach 3-44 as England beat South Africa by four wickets in the third one-day international at The Kia Oval.

But Alastair Cook's side needed a calm Eoin Morgan innings of 73 to chase down a modest South Africa total of 211 with 12 balls to spare.

Jonathan Trott (71) and Morgan put on 108 for the fourth wicket after England were reduced to 64-3.

South Africa won the toss and chose to bat, and it looked ominous for England when the opening pair of Graeme Smith and Amla eased to a second 50 partnership in a row in this series.

Smith (18) then missed an Anderson delivery in the ninth over as he tried to smear the ball through the leg side, and Amla was bowled by a Dernbach delivery that nipped back and hit the stumps via a faint inside edge.

"That will be a nice feeling for the team - it looked like a good toss for South Africa to win, but some good bowling and fielding restricted them to 211. They had a bit of a flap when Cook and Bopara got out, but Trott was consistent, and Morgan brought energy and produced the 'wow' factor."

The England fielders greeted Amla's dismissal with a combination of shock and delight. Amla had hit six scores of 50 or over in his last seven one-day internationals, and scored an undefeated 311 in his last appearance at the Oval in the first Test against England in July.

The scoring rate was always likely to slow when the hardness went from the two new balls, but the South African batsmen failed to adapt to the changing circumstances on the slow Oval wicket.

Both AB de Villiers (28) and JP Duminy (33) tried to take on James Tredwell's off spin and holed out to the boundary when well set.

Dernbach also showed great control with his subtle changes of pace, and his looping slower ball leg cutter to dismiss Dean Elgar for 42 was the pick of his three wickets.

Anderson then wrapped up the tail with three wickets for one run in eight balls.

After Ian Bell's early dismissal for 12 in the England reply, Cook and Trott got bogged down and only managed to put on 47 for the second wicket in 14.1 overs.

The England captain attempted to speed up the scoring rate with a pull from a short Robin Peterson delivery, only to pick out Elgar at deep midwicket and fall for 20.

England were then struggling when Ravi Bopara was given out caught behind for nought off the bowling off Morne Morkel.

The Essex batsman immediately called for a review of umpire Kumar Dharmasena's decision, and although there was no mark on HotSpot, there was an audible sound and third umpire Simon Taufel went with the on-field decision.

England needed 148 from 32 overs after Bopara's dismissal, but Morgan soon took the initiative with a lofted on-driven four from only the third ball he faced off Peterson.

Immediately, South Africa captain De Villiers brought in a long-on and Morgan was then able to manipulate the field with unhurried singles, before opening the shoulders later in an innings that saw him hit two sixes and seven fours.

Neither Morgan nor Trott was able to see England home, but Samit Patel (13 not out) hit the winning run off the final ball of the 48th over with a drive off Morkel.

England return to the top of the International Cricket Council one-day rankings with the series-levelling win.

The sides are 1-1 after three matches, with the opening game in Cardiff abandoned because of rain. The two sides meet again at Lord's on Sunday, and the five-match series concludes at Trent Bridge on 5 September.