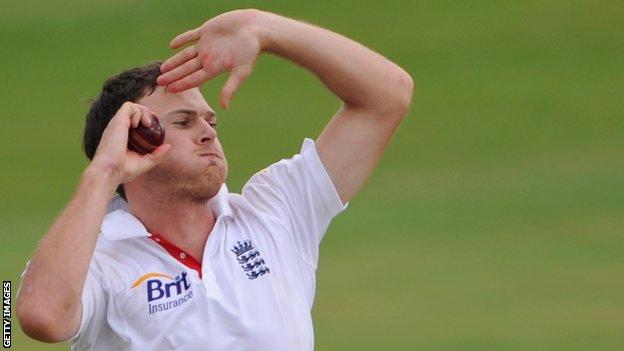 James Harris has revealed he is still undecided which county he will join.

The England Lions seamer has rejected a "substantial contract" from Glamorgan and has been offered a deal to join Division One side Nottinghamshire.

But the 22-year-old said Notts were one of a number of Division One clubs who has made their interest in him known.

"There has been stuff discussed with many counties but I am completely undecided," said Harris of his future.

Harris, who has taken advantage of a clause in his contract that allows him to be released if the Welsh county are not in the top flight, confirmed Notts do want to sign him.

The Trent Bridge club are understood to have given him a deadline of the end of August to make up his mind.

"I know Mike Newell the coach well and he coached the Lions tour I went on.

"In an ideal world I would like to have everything done and signed before the end of September."

Harris said he needed to leave Glamorgan, who gave him his First Class debut as a 16-year-old in 2007, to further his ambitions of playing for England.

"At the moment, I think I need a different challenge and that is the reason I will move," he said.

"Glamorgan have been fantastic and I want to thank them for everything they have done for me and I would like to think I will comeback and play for Glamorgan.

"The whole reason for the move is to become the best possible player I can be.

"I believe I have a chance to play for England and the reason I have made that decision is to give myself the best opportunity fulfil that dream."