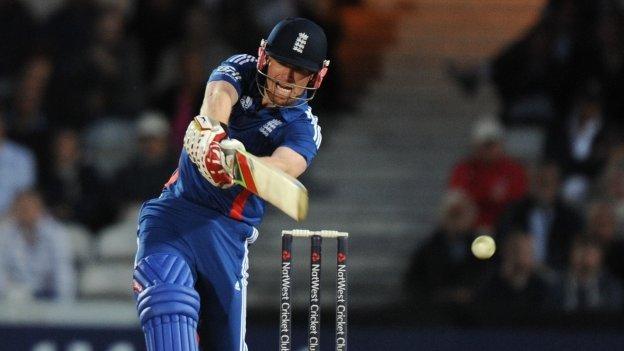 Eoin Morgan says he welcomes the added pressure England place on him in the absence of Kevin Pietersen.

Morgan hit 73 as England beat South Africa by four wickets in the third one-day international at the Kia Oval.

"I feel the extra responsibility a small bit, but I've been in the side a while now, and I enjoy taking the reins in the middle order," he said.

The Dubliner hopes his weight of runs in recent one-day internationals will help him regain his Test place.

Morgan was dropped after only scoring 82 runs in six innings against Pakistan in the United Arab Emirates in January and February, but his 73 at the Kia Oval follows a successful one-day series against Australia.

Morgan was undefeated in three innings, with a top score of 89 at Lord's, as England won that series 4-0.

"In one-dayers opportunities are limited, but I need to make the most of them before the winter tour is picked," he said.

Proteas captain AB de Villiers feels South Africa failed to build on an opening partnership of 50 between Graeme Smith and Hashim Amla, as his side posted a total of 211 from 46.4 overs.

De Villiers acknowledged he threw away his own wicket when well set, attempting to hit James Tredwell for six, only to be caught on the boundary by Ian Bell.

"The top order did not come to the party today, including myself. I was seeing it really well but then I played a very bad shot," he said.