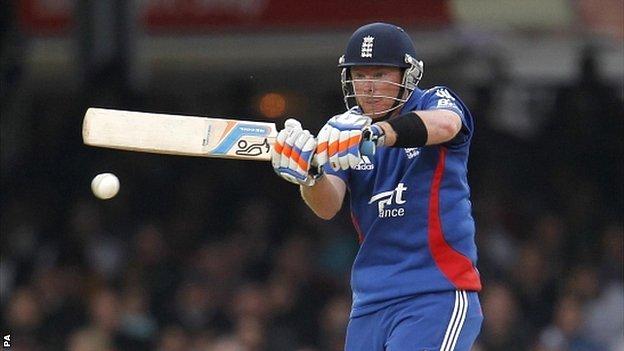 Ian Bell struck a classy 88 as England chased down a modest target of 221 to beat South Africa by six wickets and take a 2-1 lead in the one-day series.

Bell added 141 with Jonathan Trott, who played through a suspected hand fracture to make 47, before Eoin Morgan and Craig Kieswetter saw England home.

England, who cemented their position at the top of the ICC one-day rankings until the New Year, will win the series if they avoid defeat in the fifth and final match at Trent Bridge on Wednesday.

The contest followed a similar pattern to Friday's at The Oval as South Africa wasted a bright start with the bat and had to settle for a total that was always likely to prove below par.

"England looked comfortable. Ian Bell looked assured and Eoin Morgan, even though you know he's going to play big shots, makes you feel very calm. He's the real star of this one-day unit - he's the key, even though the whole team are playing well."

With the ball swinging and seaming around, openers Hashim Amla and Graeme Smith were both gifted a second life by Tredwell in the slips as they put on their third consecutive fifty partnership of the series.

Amla, the scourge of England all summer, had only scored four when Tredwell spilled a routine chance off Steve Finn at second slip.

For Smith's let-off, however, the blame lay with wicketkeeper Kieswetter, who dived across Tredwell and obstructed his view as the fielder endeavoured to get into position to take the catch.

Jade Dernbach made the breakthrough for England as Smith top-edged a bouncer through to Kieswetter, before Amla was clean bowled by a Bopara inswinger five runs short of a half-century.

Six balls later, Tredwell deceived JP Duminy with a beautifully flighted delivery and Kieswetter whipped the bails off with the batsman out of his ground.

Tredwell, finding prodigious spin from the Lord's surface, repeated the trick to remove captain AB De Villiers for 39 and Wayne Parnell for five as Kieswetter became the first keeper to claim three stumpings in a one-day international innings in England.

Dean Elgar helped prevent a total collapse with a risk-free 35, but with the innings entering the final five overs and the score still well short of the 200 mark, the tourists were desperately in need of a catalyst.

Bell's ODI scores since his recall

Enter Robin Peterson, who with a couple of lusty switch-hits and some improvised scoops lifted the total to respectability with an entertaining 31 not out off 20 balls.

South Africa made the perfect start with the ball as England captain Alastair Cook was trapped lbw by a Dale Steyn inswinger in the first over of the innings.

Bowling consistently at speeds over 90mph and swinging the ball both ways, Steyn kept the pressure on England in a hostile opening burst.

In his fourth over, a fierce short ball thudded into Trott's glove, forcing his hand off the bat and requiring lengthy treatment from the physio.

Bell took 10 overs to find the boundary but once he settled into his groove he was a joy to watch, brutally pulling Ryan McLaren in front of square on the off side and dancing down the track to plant spinner Peterson over the ropes for six.

When he finally played a false stroke after racking up his 23rd one-day fifty off 88 balls, he was hopelessly dropped by Peterson at mid-off off the bowling of Lonwabo Tsotsobe and responded by pulling the next ball for four.

At the other end, Trott battled through the obvious discomfort of his hand injury to keep Bell company and even managed some eye-catching shots as he launched a Tsotsobe short ball over point for four and clattered McLaren through midwicket.

When Trott was finally out, trapped lbw on review by Elgar, England appeared well on their way to victory, but a brief rain delay seemed to unsettle the hosts and Ravi Bopara was caught behind lazily wafting at McLaren.

Bell seemed intent on bringing up his century in style and had already played a number of false shots when he was caught behind cutting at Steyn.

But just when South Africa were sensing their chance, the cool-headed Morgan took control to steer England within reach of their target.

He effectively put the contest to bed with three fours off a McLaren over before stepping aside for Kieswetter to finish the job in style.

The Somerset stumper hammered Steyn for two fours and sealed the victory with a huge straight six which had several Lord's members scattering for cover in the pavilion.

England captain Alastair Cook: "It was a really good performance again. When you win a toss in those conditions you need to make the most of it and I thought we did.

"(Steven) Finn and Jimmy (Anderson) asked plenty of questions up front. A couple of chances went down but we hung in there.

"Then with the bat we had that really good partnership between Bell and Trotty which probably got us most of the way home. We came here to win the series, we had a slow start but now it is 2-1 and all to play for at Trent Bridge."

South Africa captain AB De Villiers: "Unfortunately the middle order failed again so we'll have to look at that. The guys will have to have a look at themselves, including me. It's a matter of knuckling down.