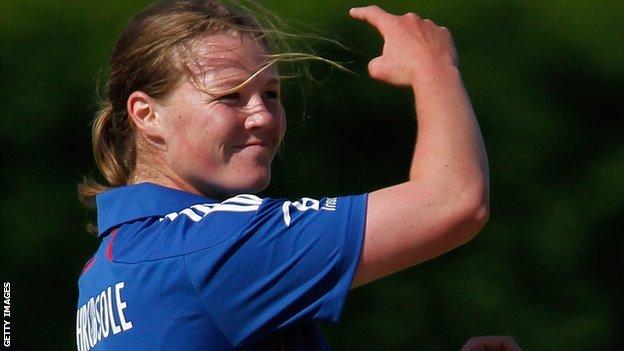 England's women saw off Pakistan by seven wickets at Loughborough to extend their unbeaten run in Twenty20 international cricket to 16 games.

England lost opener Laura Marsh without scoring, but Sarah Taylor (31) and Arran Brindle (31 not out) saw them home with four overs to spare.

The sides meet again on Wednesday.

Somerset's Shrubsole, recalled in place of Georgia Elwiss, took a wicket in each of her four overs after sharing the new ball with Katherine Brunt, while Nain Abidi top-scored with 21 before being run out by Brindle as England's three spinners put the squeeze on in mid-innings.

Asmavia Iqbal hit an unbeaten 19 from 12 balls to give the visitors' total a late boost, but although opening bowler Qanita Jalil removed Marsh and England captain Charlotte Edwards, the experienced Taylor and Brindle ensured there were no dramas in England's run chase.

Shrubsole said: "It was a solid start and I was really happy with how I performed, having missed the series against India it was good to get back out there."

After this brief series with Pakistan concludes on Wednesday, England then face a five-match series against West Indies, before the Women's World Twenty20 begins on 26 September - with England and Pakistan set to meet again in their Group A opener on 27 September.