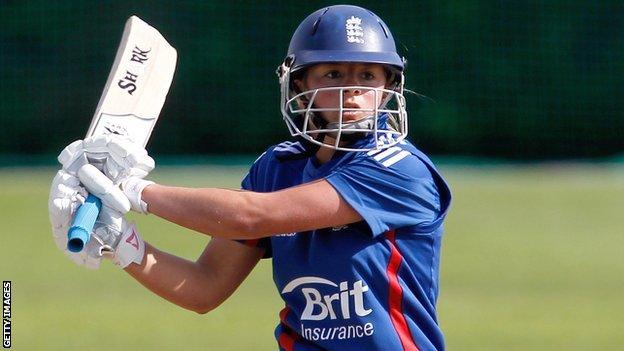 England's women wrapped up a 2-0 series win over Pakistan at Loughborough and stretched their unbeaten run in Twenty20 internationals to 17 games.

After winning the toss, the hosts posted an impressive 162-7, with Danielle Wyatt (41) making her highest international score.

In reply, Pakistan were never up with the required run rate and could only reach 81-5 from their 20 overs.

They will meet Pakistan again in their Women's World Twenty20 opener on 27 September and will start as strong favourites on this evidence.

Captain Charlotte Edwards (24) added 55 with Sarah Taylor (35) for the second wicket before Taylor became one of Asmavia Iqbal's four victims.

But player of the match Wyatt dominated the second half of their innings, helped by Susie Rowe who also made her highest score for England, smashing two sixes in an unbeaten 29 from 16 balls.

Pace bowler Katherine Brunt struck in the first over to remove opener Nain Abidi, while off-spinner Laura Marsh was the pick of England's bowlers, taking 2-15 from her four overs.

"It was another good team performance, we got the runs on the board and put them under pressure with the ball," said Wyatt.

England's first two games against West Indies, on 8 and 10 September, will be played at Chester-le-Street and then Old Trafford, before men's Twenty20 internationals between England and South Africa.

There will be commentary on both of the women's games on the BBC Sport website, with the Old Trafford contest also on BBC 5 live sports extra.