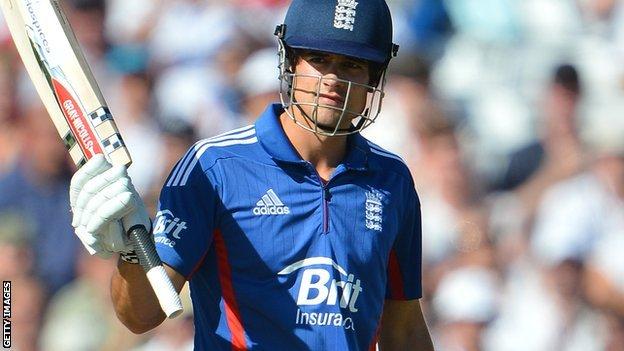 England captain Alastair Cook is happy with the progress of his one-day team, despite losing to South Africa by seven wickets at Trent Bridge.

Hashim Amla scored an unbeaten 97 as the tourists levelled the five-match series at 2-2.

"It has been a good year," said Cook, who has led his side to victories over West Indies and Australia this summer.

"The bad news for England is that Hashim Amla is in South Africa's T20 squad. He is such a great batsman - he scores all around the wicket. I think he can score a lot of runs for a long time to come because he is such a peaceful character. As a captain, you always try to spin the positives about it being a 'bad day at the office' but today's performance will concern Alastair Cook, with five or six really bad dismissals."

He added that England had recorded their highest percentage of one-day wins this year.

"There are a lot of really encouraging things and sometimes you've got to look at that big picture," added Cook.

England had won 10 out of 10 completed one-day matches until they lost the second game of their five-match series to South Africa at the Ageas Bowl.

They fought back to win the next two matches fairly comfortably and retain their ICC number one ranking in the 50-over format, but they were below par in Nottingham, with much of the blame for their defeat attributable to their batsmen, who gifted their wickets in England's 182 all out.

"It was a disappointing day - 180 on that wicket was nowhere near enough," conceded Cook, who scored 51 before chipping a catch back to part-time leg-spinner Faf du Plessis.

"It's frustrating because we came into the game trying to wrap up the series and you're not going to do that when you bat like that. I don't think I've played in a game where we've given away so many dismissals before. All of us, from one to 11, just played some pretty poor shots."

But Amla, now with more than 800 runs against England this summer, took charge with AB de Villiers, who hit an unbeaten 75.

"It's been a good summer for me and I'm glad we managed to level the series," said the South African.

"The way we bowled set it up. We had a few wickets down early doors, but myself and AB knuckled down and got it done."

England now take on South Africa in three Twenty20 internationals, the first of them at Chester-le-Street on Saturday, before flying out to Sri Lanka to defend their ICC World Twenty20 crown.