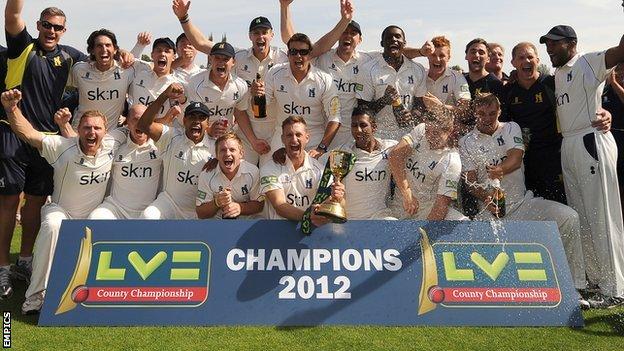 Warwickshire fully deserve to be the 2012 county champions because they have been the best team by far.

It's not just the fact they've won the title with a game to spare, thanks to a commanding performance and victory against Worcestershire, but that they've not only maintained but bettered what they did last season.

They missed out on the title to Lancashire 12 months ago in the final moments of the season but have kept up that consistency during this rain-hit summer.

That's something no other team have been able to do.

Look at Lancashire for starters. Last September they were celebrating their first outright County Championship title since 1934.

This year they find themselves in the thick of a relegation battle, desperately trying to avoid the drop to Division Two.

Then there's Durham. They're arguably the form team in the country after winning their last four games to climb away from trouble.

But, despite Graham Onions's wickets, they could not buy a result earlier in the season and it has been Paul Collingwood taking over as captain that has appeared to have been the key factor in their turnaround.

Their challenge will be to see if they can start off next season the way they have ended this.

Warwickshire have not had things their own way, though. They lost key bowlers Chris Woakes and Boyd Rankin to injury for the early weeks of the season, and they have not seen much of Ian Bell or Jonathan Trott.

Having said that, I remember seeing Bell wrapped up in a beanie hat at Aigburth early on in the season after he had just got back from England's tour of Sri Lanka.

He wanted to play to get some form, and I think the example he set both on and off the field can have only helped the Bears.

But I believe there are two main reasons behind Warwickshire's success; they have the best bowling attack in the country and their fielding has been exemplary.

With so much rain around this summer, teams have needed to bowl sides out twice relatively cheaply to win games, and Warwickshire have so much depth they have been able to do that.

As well as Woakes and Rankin, New Zealand spinner Jeetan Patel has been a key part of the attack, while Rikki Clarke and Darren Maddy have both chipped in.

But special mention must go to Chris Wright and Keith Barker, who have both finished with more than 50 Championship wickets.

It says much for the coaching of Graeme Welch, alongside director of cricket Ashley Giles, at Edgbaston, that they have been able to make Wright and Barker key components of the attack.

Wright's story is terrific. He was in the second XI at Essex and looked like being without a county before he joined Warwickshire, initially on loan, last summer.

And who can forget that Barker was a former professional footballer with Blackburn and Rochdale before he joined the Bears in 2008? Now they are both County Championship winners.

As for the fielding, the old adage that catches win matches has hardly been truer than with Warwickshire this summer.

It's difficult to recall them putting down a chance, and between them Clarke and Varun Chopra - who it must be remembered has also scored 1,000 first-class runs - have taken 52 catches in the slips. That really is quite exceptional.

Of course, where there is a winner there has to be a loser, and in this case it's Worcestershire, who, barring a cricketing miracle, will be playing Division Two cricket next summer.

Their biggest problem is their inexperience, especially in their batting line-up.

Vikram Solanki is leaving New Road at the end of the season, and they could really do with finding a couple of old heads who can do for their batting line-up what Alan Richardson has done for the bowling attack.

The fact they will be going down underlines what an achievement it was for Worcestershire to stay up last season, and there's no reason why they can't bounce straight back up again.