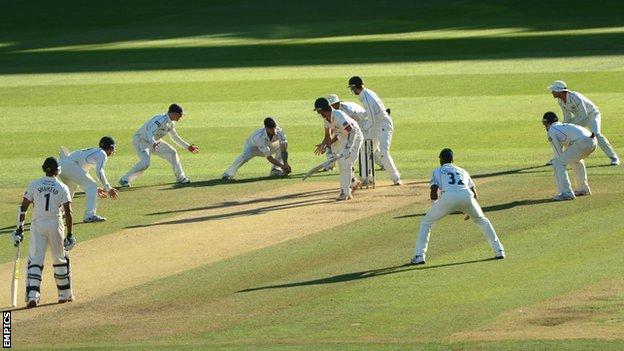 Lancashire have been relegated from Division One - 12 months on from claiming their first outright County Championship triumph in 77 years.

A 109-run defeat by Middlesex at Lord's, coming on top of rivals Surrey's 195-run win at The Oval over Nottinghamshire, sealed their fate.

Former Lancashire player Steven Crook finished with 5-48, while Ravi Patel took 4-72 to lift Middlesex to second in the table as the desperate visiting batsmen went for their shots.

Chapple took 5-47, four of those wickets in an inspired early afternoon burst with the new ball, to return a 10-wicket match haul for only the third time in his career.

But, despite the 38-year-old skipper taking his Championship haul to 42 for the season, his big breakthrough simply came too late for Lancashire.

Five different bowlers had been involved by the day's 12th over but almost an hour had gone before Rogers top-edged a delivery from Simon Kerrigan.

But, by then, his 134-run third-wicket stand with Malan has taken the home side almost out of sight.

And, although Neil Dexter sliced an attempted drive at Tom Smith to second slip, no further wicket fell until Chapple's burst.

There was a misunderstanding late in Middlesex's second innings when it was thought that the home side had declared after losing their eighth wicket on 289.

But Toby Roland-Jones, the not-out batsman, later said that he had only gone off in search of "a drink".

Chapple then claimed another wicket with the first ball after the resumption when Ravi Patel was lbw, but last man Corey Collymore survived the hat-trick.

And he was still there when the declaration did come, leaving Lancashire with the task of scoring at 7.8 runs per over.

For a while, it was a task that they looked up to, despite Ashwell Prince miscuing Corey Collymore to mid-on for 20 (after completing his 1,000 Championship runs for the season) and Smith being stumped for 21.

At 107-2, the visitors needed another 197. But when former Lancashire player Steven Crook took three wickets in the 17th over, going on to make it four scalps in 11 balls, the end was in sight.

With Karl Brown gone for 33 and Steven Croft out for 30, they were 125-6, Chapple's departure for 19 effectively sealing defeat.

"We've played really well this season. At times we've been without luck, and I think it went our way today.

"It's fantastic that we could enjoy that last day together and sit back in the dressing room and be pretty content.

"We've really competed with every team and, if things had gone our way, we might have pushed Warwickshire."

"You don't win the Championship then go into the following season thinking you might get relegated. It's something we'll have to look at as to whether we might have been complacent after last year. One for the psychologists maybe. But we certainly worked hard enough.

"All the lads have given everything they had this season, but we have just not put ourselves in enough winning positions and, when we have, we haven't capitalised on them.

"I don't want to talk about the weather. I don't want the supporters to think we're making excuses. We've still played enough cricket to get points on the board, but we've made mistakes at bad times."