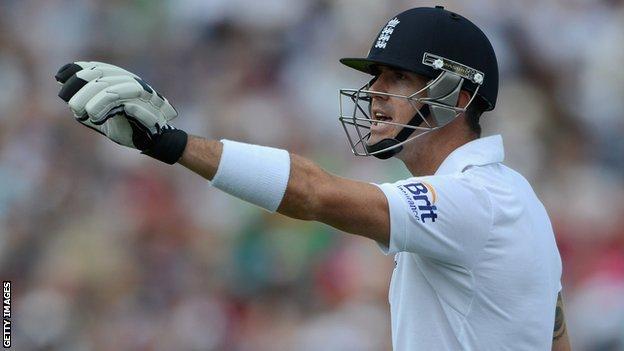 Kevin Pietersen has not been awarded an England central contract for the 2013 season, the England and Wales Cricket Board (ECB) has announced.

Ten players have been given them though, and a further four have been handed incremental contracts.

Talks with Pietersen, 32, are ongoing and remain private, the ECB said.

The Surrey player was dropped for the third Test against South Africa for sending text messages to rival players, allegedly criticising team-mates.

The new contracts are the first to be issued in the post-Andrew Strauss era.

Former England opener Strauss retired from all forms of the game, including his role as Test captain, last week.

Pietersen's omission comes after he had admitted sending "provocative" texts and issued a public apology, before dismissing them as "banter".

The South Africa-born batsman and part-time bowler spoke to Strauss before and after his resignation as Test captain and held talks with England team director Andy Flower.

National selector Geoff Miller said: "Contracts are ongoing recognition for those players who have regularly been selected for England and have performed consistently, as well as players who we feel could play an important role for England over the next 12 months."

Miller said: "Congratulations to Graham Onions, who is the one addition to the list of players who have been awarded increment contracts, and is in recognition of the effort he has put in since his return from injury in 2011 and an indication that we feel he has plenty to offer England in the coming months."

How the points system works

Onions had lost his central contract in September 2010 after struggling with a back injury that year.

As well as the out-of-favour Pietersen and the retired Strauss, paceman Chris Tremlett, who last featured for England in January, is also omitted from the new list of central contracts, having been among the 13 centrally contracted players for 2011-12.

Limited-overs regulars Samit Patel and Jade Dernbach, who had held incremental contracts for 2011-12, are not included in the new list but a points system allows non-contracted players to earn increment contracts after making a certain number of England appearances within the 12-month contractual period.