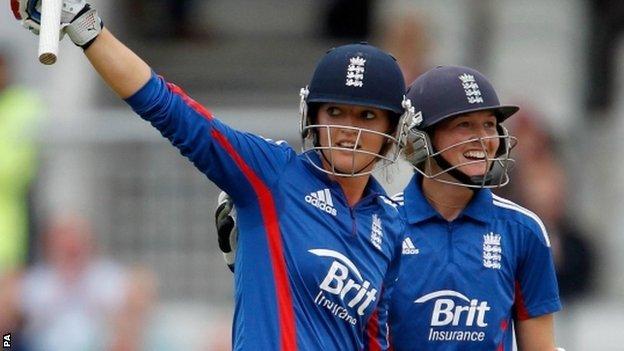 The third game of the five-match series is in Northampton on Thursday.

West Indies won the toss but Tremayne Smartt and Subrina Monroe struggled with their line and England openers Charlotte Edwards and Laura Marsh helped themselves to some easy boundaries.

The spinners put the brakes on, and slow left-armer Shanel Daley removed both openers in successive overs, Edwards cutting straight to backward point and Marsh bowled trying to give herself room.

The last time England women lost a Twenty20 international was January 2011, when Australia won by 51 runs in Canberra - in the final match of a series England took 4-1

That brought Taylor and Brindle together, and the fans who had arrived early for England-South Africa men's T20 international to be played later in the day were rewarded with a batting masterclass from the England wicketkeeper.

Taylor, who struck seven fours, worked the ball around superbly and by the time she was stumped for 53 from 37 balls with four overs left, England were in control.

Windies opener Tremayne Smartt, who did not wear a helmet, withstood some bouncers from Katherine Brunt and Anya Shrubsole.

However, as in the England innings, spin brought the breakthrough as Juliana Nero was well stumped by Taylor aiming a slog-sweep at Danielle Wyatt.

A diving catch by Holly Colvin and an even better one-handed effort by Shrubsole at mid-off removed the dangerous Daley and Deandra Dottin respectively as England took a firm grip on the game.

Their three-pronged spin attack kept the squeeze on West Indies and, although Aguilleira and Cooper enjoyed an entertaining fifth-wicket stand of 40, they left it too late to threaten the result.

Cooper was well caught by Susie Rowe - running back from mid-wicket and nearly colliding with Brunt, running in from the boundary - the tourists needed 55 from the last 13 balls.

Taylor, named player of the match, then stumped captain Aguilleira in the penultimate over to complete a comfortable England win.