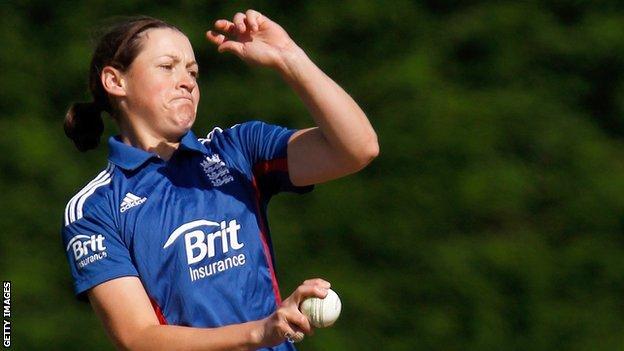 The hosts defended a total of 103-7 at Northampton to extend their unbeaten T20 run to 20 matches.

Slow left-armer Holly Colvin claimed 3-13 and seamer Arran Brindle 3-16 as West Indies were bowled out for 93.

"Every game is massive for this team," said player of the match Brindle.

"We want to win every game, so just because we are three games up in the series doesn't mean we are going to take our foot off the gas."

England laboured to three figures at Wantage Road after captain Charlotte Edwards, who won the toss, and Laura Marsh shared an opening stand of 33.

Shanel Daley, Anisa Mohammed and Shemaine Campbelle took two wickets apiece for West Indies, but they never recovered from slipping to 6-2 in the fourth over of their reply.

However, England were dealt a blow earlier in the day after Susie Rowe, a regular in the Twenty20 side, was ruled out of the World Twenty20 with a broken thumb.

The sides meet again in the on Saturday, before the final match of the series at nearby Arundel on Sunday.