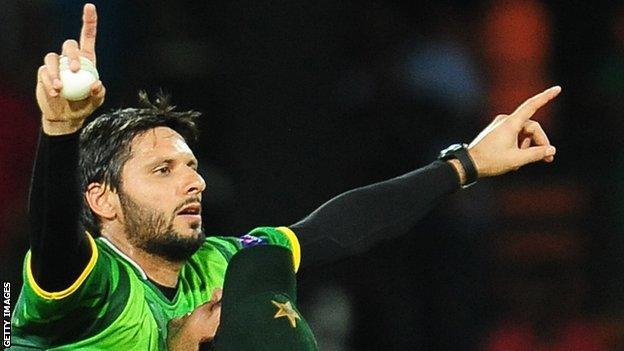 Hants qualified for the tournament for the first time after winning the English T20 competition last month.

Afridi played for the Royals in their T20 campaign in 2011, while Maxwell starred in the group stages this year.

But Neil McKenzie and Simon Katich are not named as they have already qualified for other teams competing.

Pakistan all-rounder Afridi had been scheduled to play for Hampshire in this season's T20 tournament but the plan was scuppered by visa issues.

In Hampshire's pre-qualifying group in South Africa are New Zealand side Auckland Aces and Pakistan outfit Sialkot Stallions. The group winners go through to the Champions League proper.

Otherwise, the squad includes the other nine players who beat Yorkshire Carnegie by 10 runs to lift the Friends Life t20 trophy in Cardiff last month, as well as members of the squad who have represented Hampshire in other competitions this season.

"We're absolutely delighted that Shahid and Glenn have elected to join us for the Champions League Twenty20 competition," said manager Giles White.

"Glenn had the opportunity to go with the Delhi Daredevils having played for them in the Indian Premier League but has chosen to play for us so we're very happy about that.

"Both he and Shahid have proven themselves to be valuable additions to the squad in recent years and will be more than able replacements, albeit fulfilling slightly different roles, for Neil McKenzie and Simon Katich."