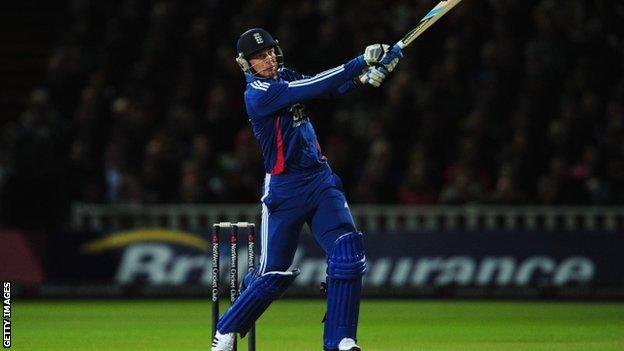 England captain Stuart Broad says his young side has enough firepower to make up for Kevin Pietersen's absence at the World Twenty20 in Sri Lanka.

Pietersen was man of the tournament in England's 2010 triumph, but was left out of this year's squad after sending texts about his team-mates to rivals.

Broad, whose side play Afghanistan in their first match next Friday, said: "I've got full belief in the squad.

"I see the guys in training every day and it's frightening what they can do."

But eight of the group were involved when England won their first global one-day title in West Indies in 2010, and they are ranked number one in the world after a 1-1 draw in the recent series against South Africa.

"I think it was 2 June when KP retired from the one-day and Twenty20 format," added Broad. "We've had a bit of time to plan without him... to get used to that.

"You've got to have the players in the changing room to win the World Cup, and I really believe we've got that."

Buttler demonstrated his potential by smashing an unbeaten 32 off 10 balls in England's 28-run victory over South Africa at Edgbaston on Wednesday, while Kieswetter struck 50 off 32.

Broad added: "We're confident. We've got some talented players here, and played some really good Twenty20 cricket in the past year.

"We've got match-winners. We saw Jos Buttler, the other night, completely change the game in an over - and that's the sort of thing you need in Twenty20 cricket.

"Unproven is probably the right word. But that doesn't mean they're not good enough."

After facing Afghanistan, England take on India on 23 September in their second group match and expect to qualify for the Super Eight phase that follows.