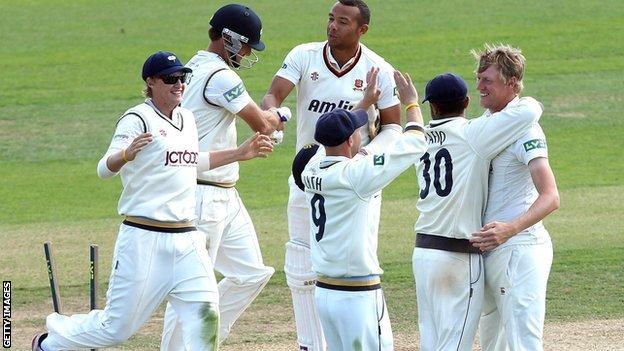 The Tykes, whose promotion to Division One was confirmed when rivals Kent lost against Glamorgan, claimed the eight wickets they needed to defeat Essex.

Yorkshire finished on the same points as Derbyshire, but their rivals had won one more match to clinch the title.

The Tykes' game ended first and they faced an anxious wait before hearing the result from Derby.

However, Derbyshire claimed the victory they needed with a six-wicket success against Hampshire, although Yorkshire end the season as the only team from the two divisions of the County Championship to remain undefeated.

Only Essex's Owais Shah reached 20 in their second innings and he remained unbeaten on 71 not out.

Rafiq dismissed both Adam Wheater and Graham Napier in the 49th over before Patterson ended the match by taking the wickets of Reece Topley and Tymal Mills in successive balls three overs later.