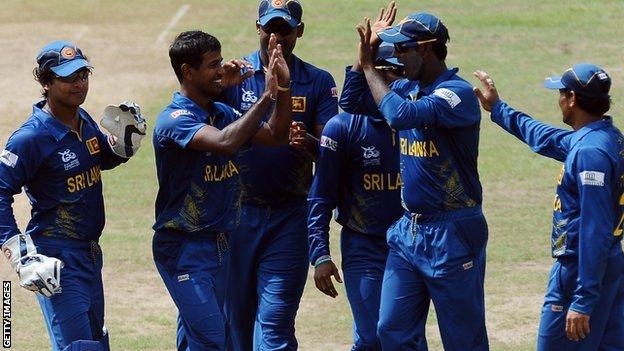 While Sri Lanka have won three Asia Cups and shared an ICC Champions Trophy title since they won the World Cup in 1996, players and fans alike will feel a second major global crown is well overdue.

This month's World Twenty20 could be the opportunity they have been waiting for. On home soil, with a well-balanced team, and lessons learnt from the recently concluded Sri Lanka Premier League (SLPL), the team's chances of claiming their first T20 title are greatly enhanced, according to skipper Mahela Jayawardene.

In fact, the main problem Sri Lanka's respected and experienced captain is facing is how best to use the talented players at his disposal.

His first dilemma concerns his own position - whether he should open the batting with aggressive all-rounder Tillakaratne Dilshan or move aside and let the latter's namesake, Dilshan Munaweera, start the innings.

The bowling attack will be led by the dangerous Lasith Malinga, retired from Test cricket but still a potent threat in the shorter game. Nuwan Kulasekara returns from injury, and one of the top-ranked T20 bowlers in the world, spinner Ajantha Mendis, is also back in form.

Having beaten Pakistan at home to record their first Test series win in the post-Muttiah Muralitharan era, and in superb form in all other formats, Sri Lanka are ready to face star-studded opponents including holders England.

But not everything is rosy for the hosts.

The fact Sri Lanka's two first-round matches are being played in the Mahinda Rajapaksa stadium in Hambantota is worrying, according to the editor of popular fans' website Island Cricket.

"If the two T20 Internationals played at the venue previously are anything to go by, the conditions do not favour batting, especially when chasing," Hilal Suhaib told BBC Sinhala service.

"It is true that in ODIs teams have surpassed 300 at Hambantota, but the wicket there still remains largely a mystery," he added.

The fact SLPL games were played only in Colombo and Kandy, makes it still more difficult to determine how the surface will play during Sri Lanka's opening encounters, he says.

"The last match played in Hambantota was a day-night ODI against India in July, and the Indians were bowled out for 138 in 34 overs," he said.

It is, however, not only available talent and the character of the pitches that matter - at least, not in the sub-continent.

Sri Lankan cricket has never been to far away from controversy in recent years, as Sangakkara's 2011 Spirit of Cricket Cowdrey lecture at Lord's highlighted.

However, with the trouble now fading away, it seems Sri Lanka's cricketers are determined not to let off-field issues ruin the country's chances of claiming a first big title in 16 years.