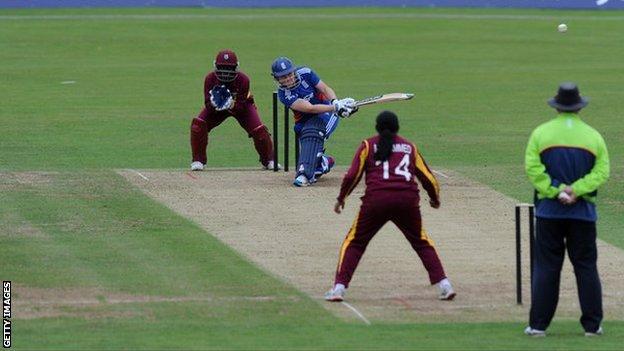 England's 21-match Twenty20 unbeaten run was ended with a three-wicket defeat by West Indies at Arundel.

Holding a 4-0 lead in the five-match series, the home side made changes to their batting order, with captain Charlotte Edwards batting at 11 and Lydia Greenway rested.

The hosts made 139-7, but the Windies get home from the final delivery after Deandra Dottin's 62 from 34 balls.

England begin their World T20 campaign against Pakistan on 27 September.

Edwards, whose side travel to Sri Lanka on Wednesday, said: "We tinkered with our batting order and team a bit today all in preparation for Sri Lanka but the girls still put in a fantastic performance.

"We were just undone by an unbelievable innings by Deandra Dottin. Credit to her for a match-winning performance.

"We'll be taking a huge amount of positives from the series. There have been key contributions from a lot of our players over the five matches, which is always good with World Cups ahead.

"The bowlers have been fantastic throughout the series and it's been another really good team performance.

"We're going to Sri Lanka with confidence and are really looking forward to the next few weeks."