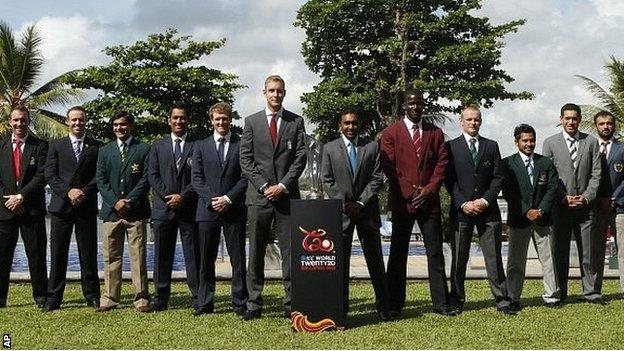 The fourth ICC World Twenty20 begins on Tuesday when the hosts Sri Lanka take on Zimbabwe in Hambantota (15:00 BST).

Twelve teams start the tournament with the top two from each group of three progressing to the Super Eights, and the final being played on 7 October.

Defending champions and world number one side England, led by Stuart Broad, face Afghanistan on Friday and India on Sunday in Group A.

Ireland take on Australia on Wednesday and West Indies on Monday in Group B.

England go into the tournament with growing confidence after drawing the Twenty20 series with South Africa and beating Australia in a warm-up match on Monday.

Without the out-of-favour Kevin Pietersen, the man of the tournament when England won the last tournament in the Caribbean in 2010, Broad's side will hope the innovative Eoin Morgan can fill the gap in the batting.

Wicketkeeper-batsman Craig Kieswetter opened in 2010 with Michael Lumb, but this will be the first major tournament for the big-hitting Alex Hales, Jonny Bairstow and Jos Buttler.

"We're confident," said Broad. "We've got some talented players here, and played some really good Twenty20 cricket in the past year. We've got matchwinners in the side."

2007: Lost all three matches in Super Eight stage and were knocked out

2009: Won one and lost two in Super Eight stage and were knocked out

2010: Beat Australia in the final to win their first-ever ICC limited overs trophy

Ireland face Australia on Wednesday seeking to show why they are ranked above the 2010 runners-up.

William Porterfield's side beat England in the last 50-over World Cup and have in the O'Brien brothers, Niall and Kevin, two batsmen capable of taking on any bowling attack.

"The guys have done it in World Cups before. People have underestimated Ireland and often come unstuck," said fast bowler Tim Murtagh.

Sri Lanka, with home advantage, have high hopes of winning the tournament for the first time.

"We are one of the favourites but we are part of the pack that if we get into a good momentum could go all the way," said captain Mahela Jayawardene.

"Sri Lanka is a cricket-crazy country and the expectations are high."

Along with newly crowned cricketer of the year Kumar Sangakkara, Jayawardene and Tillakaratne Dilshan will do damage with the bat, while Sri Lanka can also call on talented all-rounders Angelo Mathews and Thisara Perera.

India, winners of the inaugural event in 2007, are also strongly fancied given the experience their team have gained from playing in the Indian Premier League.

They are the reigning 50-over world champions and in Mahendra Dhoni have an inspirational captain while batsman Yuvraj Singh has battled back from cancer to take his place in the team.

West Indies have also been touted as potential champions, with explosive batsmen in Chris Gayle, Kieron Pollard and Marlon Samuels, and a wily spinner in Sunil Narine, while South Africa, 2009 winners Pakistan and Australia all have strong sides that could challenge for the title.

England, West Indies, Sri Lanka and New Zealand are seeded to meet in group one of the Super Eights with arch-rivals India and Pakistan seeded to face Australia and South Africa in Group B.

The women's tournament starts on 26 September with the semi-finals and final taking place before the men's matches. Australia will be defending the title they won in 2010.