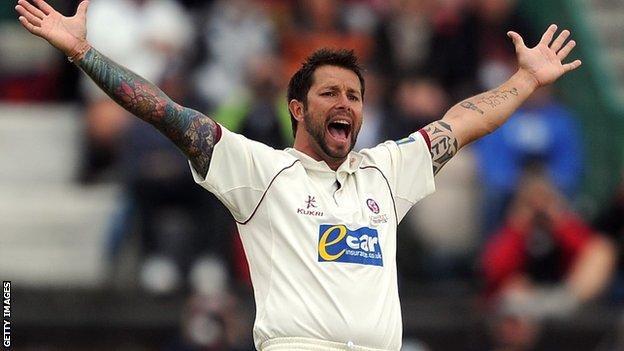 Somerset all-rounder Peter Trego has been named county cricket's Most Valuable Player for the 2012 season.

It is the third time in four years the award has been handed to a Somerset player, following captain Marcus Trescothick's success in 2009 and 2011.

Trego notched 897 runs and took 67 wickets in all competitions this term.

"Trescothick is our talisman and we follow him on to the battlefield every day, but following him for an award is special," Trego told BBC Somerset.

"We all know the calibre of Marcus and to be underneath him on the role of honour is one of the biggest achievements of my career.

"I really feel like I deserve the award. It's been well- documented how many overs I've had to toil through and that last delivery that I bowled couldn't come quick enough.

"I'm grateful to my team-mates for backing me up and it's a really great moment."

MVP rankings reward players for every run scored, every wicket taken and every catch held.

There are also bonuses awarded to those whose runs and wickets contribute to a win for the team, with captains earning points for their command of the side.

Trego continued: "From a team point of view, what we've achieved this year is big because we've had so many situations that have come up against us - whether it be injuries of problems with overseas players.

"We've thrown a load of young guys in to the fire and they've come out pretty good.

"To finish second [in Division One] is a really big achievement."