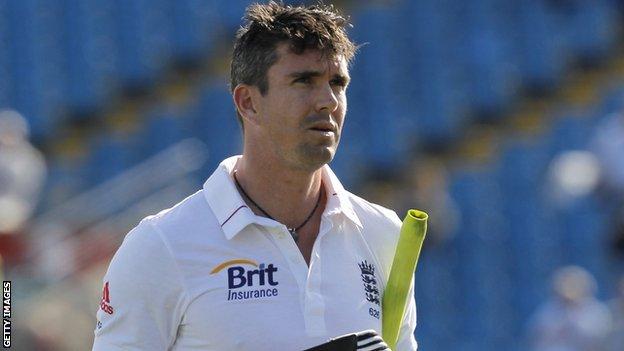 Kevin Pietersen has been left out of England's squad for their tour of India this winter, despite talks between management and player.

Yorkshire's Joe Root, 21, is included after a fine year, as is Nick Compton, who hit 1,191 runs for Somerset and is the grandson of England great Denis.

"I think England have told Pietersen to go away and think about things, that they need to see actions speaking louder than words. If he wants to fully commit himself to England, he needs to show that through his actions this winter."

Left-arm spinners Monty Panesar and Samit Patel are both included.

They join first-choice spinner Graeme Swann in the 16-man touring party, while batsman Eoin Morgan returns after being dropped following England's disappointing series against Pakistan in the spring.

Ravi Bopara is omitted after a troubled summer, while there is no place for fellow batsman James Taylor, who played the last two Tests against South Africa. With no reserve wicketkeeper named, batsman Jonny Bairstow will act as back-up to Matt Prior.

The first Test of four begins in Ahmedabad on 15 November, with Alastair Cook leading the side for the first time as permanent Test captain following Andrew Strauss's retirement.

Pietersen, who said he was "naturally disappointed" by his omission, was dropped for the third Test against South Africa after allegedly criticising team-mates, including then captain Strauss, in messages to opposition players.

The Surrey right-hander was not picked for the ICC World Twenty20, which begins in Sri Lanka on Tuesday, and was not given an England central contract for 2012-13.

Two weeks of talks, brokered by the Professional Cricketers' Association, are understood to have been fruitful but were not enough to win Pietersen back his England place at this stage.

"These discussions remain private and confidential," said England managing director Hugh Morris. "As there are issues still to be resolved, Kevin has not been considered for selection for the India tour."

England batsman Ian Bell, who may miss the second Test in Mumbai as his wife is expecting their first child at that time, said the team would miss Pietersen's skills.

"He is a match winner and there are times when he plays a knock that not a lot of people in the world can play," Bell told BBC Radio 5 live.

"Then again, the likes of Jonny Bairstow and whoever takes his place in the squad have got to take their opportunity."

"Andy Flower and Alastair Cook were central to this because they feel it is still too raw. There are some players in the England dressing room who don't have much time for Kevin Pietersen at all. It has been left to linger on for too long in my opinion. I believe he will play for England again in New Zealand in February but he will want the work flow sorting out as he has realised he has overstretched himself and some of the players can't stand him at the moment."

On Monday, Root, who has played four first-class games for the second-string England Lions side, was named the Cricket Writers' Club young cricketer of the year.

The Sheffield-born youngster, who scored almost 1,000 runs in his first season as a county cricketer in 2011, played a large part in Yorkshire's promotion from Division Two of the County Championship, in which he scored 738 runs at an average of 43.41.

Compton, 29, was the only England-qualified batsman to score 1,000 Championship runs this season, finishing with 1,191 at 99.25, with four hundreds and seven fifties.

Bell agrees Compton has had a great season. "He's been a very consistent player and has made big strides," said Bell. "He's a bit like Jonathan Trott. Once he gets in, he tends to go on and make big runs."

Compton was born in South Africa before moving to England in his teens. Grandfather Denis, who also played football for Arsenal, played 78 Tests for England between 1937 and 1957, scoring 17 hundreds at an average of 50.06.

"The conditions in India will be tough, but I've experienced different conditionsand it's enjoyable to test yourself."

National selector Geoff Miller said: "Nick Compton has performed well consistently for Somerset this season, made big hundreds, and shown that he has the temperament and the technique to play at a higher level.

"Joe Root is a player who has been successful at every level from county cricket through to the England Performance Programme and England Lions. He deserves this opportunity to step up to the next level and press his case for a place in the Test side."

Bopara pulled out of the Tests against South Africa mid-series for personal reasons, but struggled with the bat in the one-day series on his return to England action, and Miller confirmed that there were still some personal issues precluding his selection.

Although Taylor has not made the full squad, he is included in a 17-man England Performance Programme line-up, who will tour India for a month from mid-November and act as back-up for the main party.