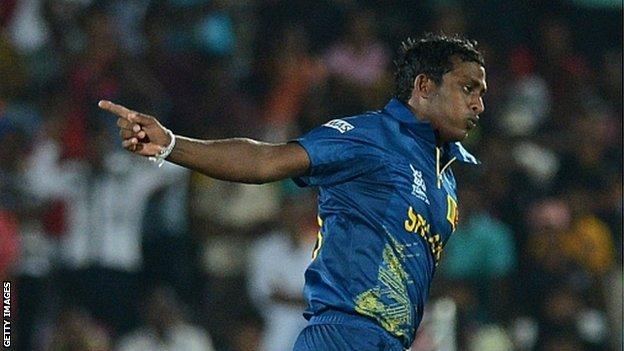 Ajantha Mendis recorded the best figures in a Twenty20 international as hosts Sri Lanka thrashed Zimbabwe in the first match of the World Twenty20.

The off-spinner bamboozled the Zimbabwe batsmen in an incredible haul of six wickets for eight runs from four overs.

Zimbabwe were skittled for 100 with leg-spinner Jeevan taking three scalps in his team's 82-run victory.

It was a superb all-round performance from Jeevan but it was his namesake Ajantha who stole the show.

Recalled to the Sri Lanka Twenty20 side for the first time in 10 months, he ripped through the hapless Zimbabweans with his array of regulation off-spinners, googlies and "carrom" balls.

He bettered his own record figures of 6-16 against Australia in August 2011 and the previous best at a World Twenty20, which was Umar Gul's 5-6 for Pakistan against New Zealand at The Oval in 2009.

Zimbabwe had made a solid start to their run chase with an opening partnership of 37, but two wickets in two balls from Ajantha put Sri Lanka firmly back on top.

He bowled Vusi Sibanda with a ball that held its line and had captain Brendan Taylor stumped by one that turned sharply away from the bat.

Leg-spinner Jeevan followed up with the wickets of Craig Ervine and Michael Waller before Ajantha returned to rattle through the lower order.

When last man Chris Mpofu picked out mid-off to give Lasith Malinga his first wicket, Zimbabwe's misery was over.

Earlier, Sri Lanka's openers, assisted by a pair of dropped catches by Waller, had laid the foundations for a healthy total with a partnership of 54 in 6.3 overs.

Zimbabwe hit back with three quick wickets as Dilshan Munaweera was run out for 17, Tillakaratne Dilshan caught behind for 39 and captain Mahela Jayawardene run out for 13 after attempting a risky second run.

"What a display we've seen from Ajantha Mendis. It was tough to watch, the Zimbabwe batsmen had no clue. Normally you see a batsman from a Test country have an idea of how to go about batting against someone you can't read, but they were thrown to the wolves."

But Jeevan - promoted up the order ahead of Angelo Mathews - and Sangakkara put the hosts firmly back on top.

Sangakkara, named ICC Cricketer of the Year on Saturday, struck two fours and a six before he was run out for 44 in the final over.

Jeevan finished unbeaten on 43 off 30 balls as Sri Lanka racked up an imposing total that was always likely to be out of Zimbabwe's reach, even before the outstanding Ajantha got to work.

"It's tough playing a team like Zimbabwe," said Sri Lanka captain Jayawardene. "You can't take anything for granted and we had to make sure we played to our potential."

"It is a tough pill to swallow," said Zimbabwe skipper Taylor. "We are a far better side than what we showed, but credit goes to Sri Lanka. They showed why they are one of the favorites to win the tournament."

Sri Lanka go on to face South Africa in their final group match on Saturday, while Zimbabwe take on the same opponents on Thursday.

The tournament features 12 teams with the top two from each group of three progressing to the Super Eights, and the final being played on 7 October.

Defending champions and world number one side England, led by Stuart Broad, face Afghanistan on Friday and India on Sunday in Group A.

Wednesday's matches are Ireland against Australia and India versus Afghanistan.