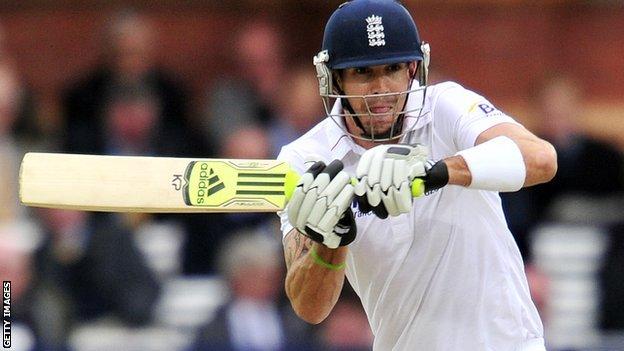 Kevin Pietersen says he is disappointed to have been left out of England's tour to India and has reiterated his desire to play international cricket again.

A statement issued on behalf of the 32-year-old claimed he had apologised to ex-England captain Andrew Strauss and also met new skipper Alastair Cook.

It also denied Pietersen had offered tactical advice to the South Africans.

Discussions between Pietersen and the England and Wales Cricket Board have been ongoing since the second Test against Proteas at Headingley, when the Surrey man himself cast doubts on his future.

The batsman subsequently backtracked on his threat to retire from international cricket, but the texts he sent to South Africa players, which allegedly criticised Strauss and reportedly gave advice on how to get him out, ensured he has not played for England since.

The statement from the Pietersen camp was issued shortly after the squad for the tour to India was announced.

"Andy Flower and Alastair Cook were central to this because they feel it is still too raw. There are some players in the England dressing room who don't have much time for Kevin Pietersen at all. It has been left to linger on for too long in my opinion. I believe he will play for England again in New Zealand in February but he will want the work flow sorting out as he has realised he has overstretched himself and some of the players can't stand him at the moment."

"At all times, Pietersen had wished his dealings with the ECB to remain private so as not to inflame an already difficult situation," it read.

"His recent silence was not an admission of any wrong-doing, he wanted to explain and apologise to the ECB for the messages exchanged with members of the South African team.

"He has also made absolutely clear both to the ECB and the England team that despite unsubstantiated allegations to the contrary and repeated media speculation, he did not offer any tactical advice to the South Africans."

With Strauss retiring from all forms of cricket and Pietersen still at odds with the ECB, England have named uncapped batsmen Joe Root and Nick Compton in a 16-man squad to tour India that also includes Eoin Morgan, Monty Panesar and Samit Patel.

The statement continued: "Kevin Pietersen is naturally disappointed about today's decision having gone to great lengths to reach a reconciliation with the ECB.

"Pietersen has met with - and apologised to - Andrew Strauss. He has also met with Alastair Cook to stress his commitment to England and met with ECB board members, including face-to-face meetings with Hugh Morris, David Collier and Andy Flower.

National selector Geoff Miller said he had informed Pietersen of his omission, and that the Surrey batsman will remain unavailable until the dispute with the ECB is settled.

"I've not been given the opportunity to select him because of the issue," Miller told BBC Radio 5 live. "When the board says everything is OK, we will revisit the selection process.

"Until these issues have been resolved then nothing can happen."

Depending on his discussions with the ECB, Pietersen's next opportunity to be selected for England would come in the limited-overs leg of the tour of India, with two Twenty20 games to be played before Christmas and five one-day internationals scheduled for the new year.

England then tour New Zealand in February and March before a home series against the Kiwis is followed by the Ashes in England.

Pietersen, who is working as a television pundit during the World Twenty20 in Sri Lanka, is set to return to play for the Delhi Daredevils in the Indian Premier League, which begins on 3 April.

His time at the IPL had previously been restricted to three weeks and, though this was once part of the dispute with the ECB, Pietersen has since said he is willing to return from the tournament early.