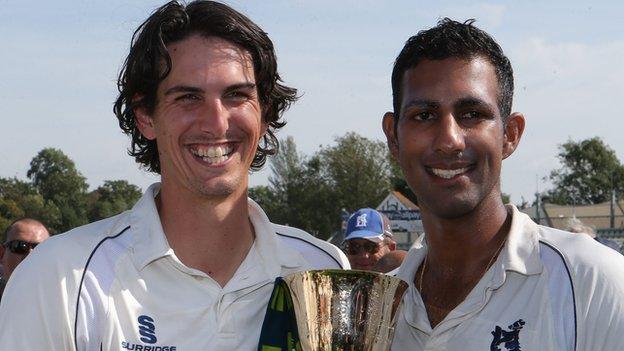 Warwickshire opener Varun Chopra has been rewarded for his part in the Bears' County Championship win by being called up by England as winter cover.

He joins team-mate Chris Wright in a 17-man England Performance Programme squad to tour India from mid-November and act as back-up for the main party.

"Ashley Giles gave me the news on Saturday at Lord's, which made it a strange one," he said.

"It was a whole day of mixed emotions for me," Chopra told BBC Sport.

"But I'm now just looking forward to the winter tour. I've been to India before on a couple of training camps in Mumbai.

"And being in the country while the main tour party are there will certainly help."

While Wright's 62 Championship scalps made him the country's second-highest wicket-taker, behind only Durham's Graham Onions, Chopra was one of only four Division One batsmen to get his 1,000 runs this summer (Somerset's Nick Compton was the only other Englishman).

Having achieved that feat for the second successive summer, Chopra suspected that he might be in the frame for winter duty, especially after being selected for the England Lions against the touring Aussies in August.

"I always had ambitions of getting an England call-up," he added. "But playing for the England Lions in the summer was an indicator.

"It's been a very wet summer. And conditions early on in the season were not easy, so to end up with over 1,000 runs I've got to be pleased with that.

"You always want more but I knew that I was in the in-form players in the country and then Andrew Strauss going left the door open."

Chopra's selection, along with fellow former Essex man Wright, is reward for the big part they played in bringing the Championship pennant back to Edgbaston after an eight-year absence.

But he is frustrated that they could not make it a double, being beaten off the final ball by Hampshire on Saturday in that dramatic climax at Lord's.

"We were hopeful at the start of the season," said Chopra. "We remembered that feeling from last summer that we almost had the championship won, but not quite, and that really motivated us.

"Everyone was very happy, but then we were so disappointed not to win at Lord's. To go down to the last ball made it even more painful."

While Ian Bell and Jonathan Trott will be in England's tour of India, and Chopra and Wright lie in wait, hoping for a chance, one more Bears player has been picked for representative duty.

Fast bowler Keith Barker has been selected in a seven-man England squad for the Hong Kong Sixes at Kowloon (27/28 October).