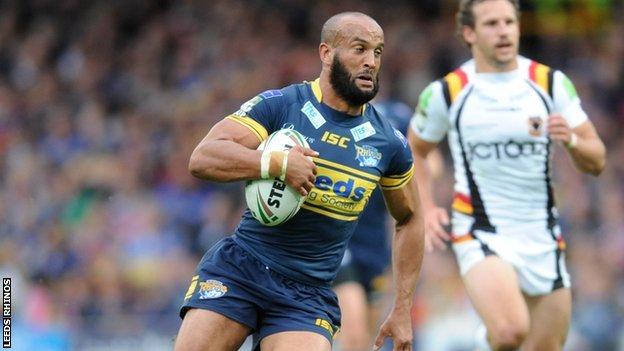 Leeds Rhinos prop forward Jamie Jones-Buchanan has likened his team-mates to a mob of meerkats.

The Rhinos face Catalan Dragons at the Stade Gilbert Brutus on Friday in the Super League play-off eliminator.

"I've described the team as being like meerkats when they're on form," he told BBC Radio Leeds.

"Everyone stands up and looks more attentive and when we can smell autumn in the air, it reminds us of what we've done before."

The best way to describe the atmosphere in Perpignan is crackers. They love their rugby and they get right behind their team

He added: "This is the time of year where we've won Grand Finals and there's a real play-off feel about the team at the moment."

The reigning Super League champions finished fifth in the regular season, the same spot they finished in last season before going on to win the Grand Final against St Helens.

Jones-Buchanan believes the side will need to start strongly in Perpignan if they are to continue their play-off campaign this year.

"It is a real fortress out there and we know how big a challenge it is," he continued.

"The best way to describe the atmosphere is crackers. They love their rugby and they get right behind their team.

"You have to turn up and you have to start strong. Last time we went there we started a bit tentatively but then scored a lot of points in the last 20 minutes when we threw caution to the wind and I think that's what we need to do this time."