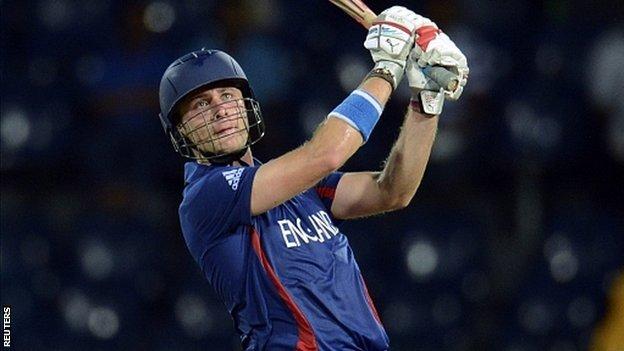 Luke Wright hit 99 not out as England began their World Twenty20 defence with a crushing 116-run win over Afghanistan to book a place in the Super Eights.

England were 0-1 after one over and 15-1 after four, but Wright, Alex Hales and Eoin Morgan transformed the innings with a barrage of boundaries.

Afghanistan lost two wickets in the first seven balls and crumbled to 80 all out to go out of the tournament.

Jade Dernbach, Stuart Broad, Graeme Swann and Samit Patel all took two wickets but there was no doubt about the man of the match.

Wright had been in the international wilderness for 15 months before he replaced the out-of-form Ravi Bopara for the two pre-tournament matches against South Africa earlier this month.

An inconsistent performer for England in the past, he has clearly benefited from spells in the Indian Premier League and Aussie Big Bash and come back with a game based around clean, straight hitting.

The Sussex all-rounder smashed six sixes and eight fours in 55 balls as he amassed his highest score in 79 limited-overs matches for England, missing out on a century by one run when he could only collect two from the last ball of the innings.

Wright entered the fray with England in a pickle after Craig Kieswetter played on from the last ball of a maiden first over from Shapoor Zadran.

He began slowly, but his innings took off in the fifth over as he drilled Shapoor for a straight four and a six after Hales had got England going with consecutive boundaries.

"The tournament is going OK, but what we need is a really cracking game where no-one knows the result with four balls to go. Not many of the big teams have played each other yet. What may hearten England is not the 196 runs, but those two brilliant pieces of fielding by Buttler and Bairstow. Those were the two pieces of cricket where you'd think 'not many other teams could have done that'"

The duo added 69 for the second wicket before Hales was run out backing up when bowler Karim Sadiq diverted Wright's drive onto the non-striker's stumps.

Morgan kept up the momentum with a breezy 27 and Buttler bashed 15 off seven balls before he was trapped lbw by Izatullah Dawlatzai.

Bairstow bludgeoned his first ball into the stands and Wright smashed poor Izatullah for three sixes in a row to surge into the nineties.

Bairstow was out for 12 in the last over, leaving Wright to face the last ball on 97. A low full toss was heaved away to leg but when the wide long-on fielder did his job Wright had to settle for two, and 99 not out.

Afghanistan showed tremendous spirit in but they never came close to troubling a ruthless England side.

Their run chase got off to a woeful start when big-hitting opener Mohammad Shahzad skied the last ball of the first over to mid-off and was swiftly followed back to the pavilion by Shafiqullah, who perished playing a similarly reckless shot.

Superb fielding accounted for the next three wickets as Broad held on to a sharp caught-and-bowled chance to remove captain Nawroz Mangal, Buttler ran out Karim Sadiq and Asghar Stanikzai was brilliantly caught by Bairstow running in from long leg.

Spinners Patel and Swann rattled through the next three batsmen to leave Afghanistan in a hopeless predicament on 26-8, only for an entertaining 44 by Gulbodin Naib to spare them the ignominy of the lowest Twenty20 international total - the 67 scored by Kenya against Ireland in 2008.

Naib's innings merely delayed the inevitable and when he was the last man out, caught by Morgan off Dernbach, Afghanistan's World Twenty20 adventure was over.

England, meanwhile, go on to face India on Sunday with both teams already through to the last eight.