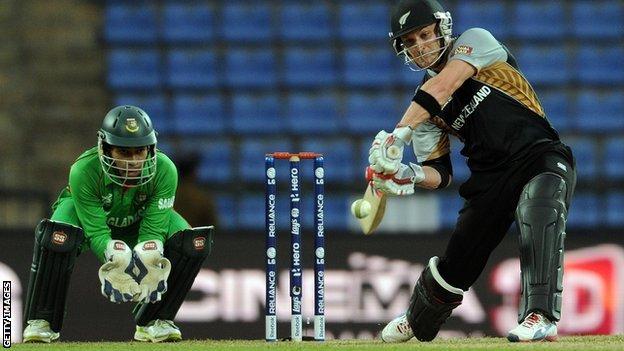 Brendon McCullum hit the highest score in Twenty20 international history as New Zealand beat Bangladesh by 59 runs at the World Twenty20 in Pallekele.

McCullum plundered seven sixes and 11 fours in his 58-ball 123, beating the record of 117 previously jointly held by Richard Levi and Chris Gayle.

His stands of 94 and 78 with James Franklin and Ross Taylor respectively helped the Kiwis to 191-3.

The Tigers' poor attempt at the run chase ensured that this was another one-sided World Twenty20 contest, but McCullum's brilliance had already brought the tournament to life.

Mixing improvisation with orthodoxy, the right-hander scored all around the wicket to become first man to score two Twenty20 international centuries.

His assault made a mockery of Mushfiqur Rahim's decision to field after winning the toss in grey conditions, as New Zealand dished out some brutal treatment to the Bangladesh spinners who extracted little turn.

McCullum regularly swiped the slow bowlers through the leg side, but the highlight of his innings came when he advanced down the wicket to flat-bat pace bowler Mushrafe Mortaza tennis-style over long off for six.

He benefited from one slice of fortune, being dropped at extra cover by Mortaza when on 92, but, later that over he pulled Elias Sunny to the leg-side fence to bring up his century.

With eight balls of the innings remaining, McCullum had the record in his sights and, after dispatching Sunny straight for a maximum, he repeated the dose in the following over by hitting Abdur Razzak over mid-wicket.

An exchange of singles with Taylor and a two taken to point brought McCullum level and, with two balls remaining, history was made as Razzak was again heaved over the leg-side fence.

He fell to the final delivery, caught in the deep on the off side, but McCullum had seemingly done enough to to put the match well beyond Bangladesh's reach.

And so it proved as Tamim Iqbal, the Tigers batsman most likely to match McCullum's exploits, was caught at cover off Mills in the opening over.

From there, wickets fell with regularity until Nasir Hossain and Mahmudullah added 50 for the fifth wicket, but Hossain's 39-ball half-century came far too late to make an impact on the result.