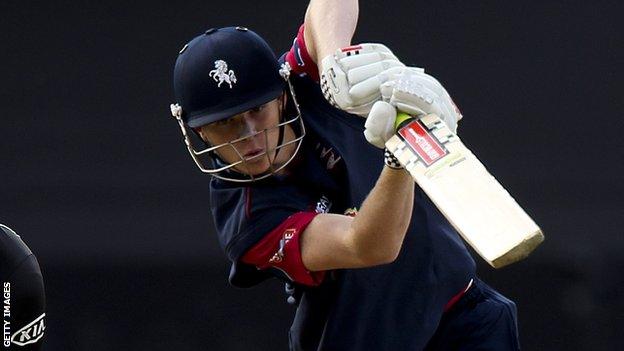 Kent wicketkeeper-batsman Sam Billings has targeted a place in the county's four-day team next season.

The 21-year-old, who was the county's top run-scorer in both one-day formats in 2012, signed a new two-year contract this week.

He told BBC Radio Kent: "I was lucky enough to get an opportunity at the top of the order in one-day cricket.

"Hopefully I can build on that. I'd love to play all forms of cricket and get into the Championship side."

Billings continued: "I'd like to build on the promising start I made this year by going up a level and scoring even more.

"It's probable I will start in the second team next year. I've just got to churn out the runs and wait for the opportunity."

The Loughborough University graduate is to spend the next five months playing in Adelaide in Australia as he aims to improve his game.

"There's plenty to work on this winter," Billings continued.

"Hopefully going to Adelaide will give me the best chance for next year.

"Knowing the art of batting, batting for long periods of time and a different environment will help my game."