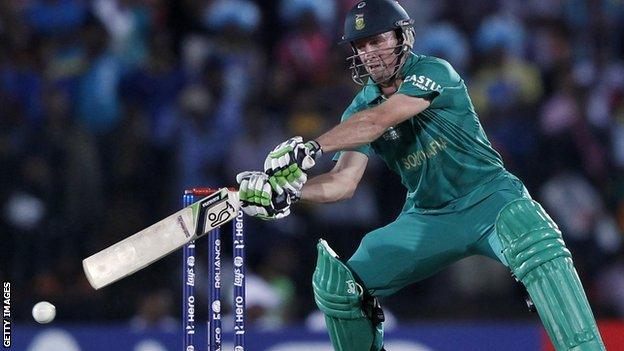 South Africa eased to a 32-run win over Sri Lanka in a match reduced to seven overs per side at the World Twenty20 in Hambantota.

After rain delayed the start by two and a half hours, South Africa posted 78-4, will captain AB de Villiers hitting 30 from only 13 balls.

Both sides had already qualified for the Super Eight stage.

After both teams had completed routine wins over Zimbabwe, the truncated nature of this game has provided little clues as to which side is in better shape for the second phase.

Indeed, one reason for the comfortable nature of South Africa's win could be the fact that they have recent experience in playing trimmed-down versions of T20 cricket, with two matches in England being reduced to nine and 11 overs respectively.

This win was built on the brilliance of De Villiers, who did not arrive at the crease until the end of the third over, but scored 30 of the 38 runs that were added in the next three.

Strong through the off side, De Villiers also twice cleared the leg-side fence, the second maximum a huge hit from a Lasith Malinga short ball.

When the skipper finally fell to Malinga, caught at mid off, it was left to JP Duminy to add a late boost by taking 10 from the final two balls of the innings.

Even then, South Africa's total looked to be in Sri Lanka's reach, particularly as the only other World T20 game reduced to seven overs saw New Zealand chase down Scotland's 89 with an over to spare in 2009.

But Dilshan was run out without facing a ball by the combined brilliance of De Villiers and Albie Morkel before Jayawardene heaved Dale Steyn into the hands of Farhaan Behardien deep on the leg side.

From there, with wickets falling at regular intervals, the host nation never looked like reaching their target.