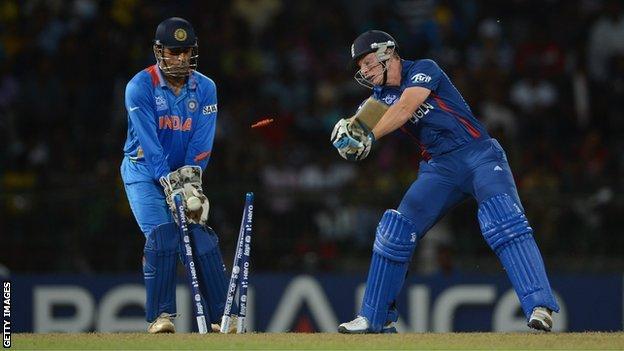 England fell to their lowest total and heaviest defeat as they lost by 90 runs to India in their final World Twenty20 group match in Colombo.

England had already qualified for the next stage, but their frailties against spin were again exposed as they were bowled out for 80 in 14.4 overs.

India had earlier posted 170-4, with Rohit Sharma blazing an unbeaten 55.

Both sides had already secured their place in the Super Eights, but that will be scant consolation to an England side that should be alarmed at the way they capitulated to India's spinners.

Captain Stuart Broad may also look to mistakes made in the team selection, as the slow left-arm spin of Samit Patel was omitted in favour of the pace of Tim Bresnan.

Broad saw his only spinner, Graeme Swann, return an economy rate of 4.25, while all of the fast-bowling quartet conceded more than eight runs per over.

But it would be unfair to blame the bowlers for this defeat, as England's batsmen again wilted when faced with quality slow bowling on the subcontinent.

After spin was introduced in the sixth over, six wickets fell in the next seven, providing England with questions to answer both in the remainder of this tournament and during the tour of India later in the year.

Alex Hales and Luke Wright had already fallen playing across the line to the left-arm seam of Irfan Pathan before the spinners wreaked havoc.

With no batsman apparently able to read which way the ball was turning, Eoin Morgan and Jos Buttler were both bowled trying to cut Harbhajan, while Craig Kieswetter, who had looked most likely to lead the England chase, offered a simple slip catch off Chawla.

"The rot started with Alex Hales's dire shot in the first over of England's innings. I don't know how he was expecting to hit the ball with a swipe across the line like that - he might as well have just walked away from his wicket and let the bowler hit it."

Jonny Bairstow and Bresnan were undone trying to sweep Chawla and Harbhajan respectively, with Swann then stumped off the veteran off-spinner.

When Broad was caught in the deep off Ashok Dinda, England were in danger of being bowled out for the lowest T20 international score of all time, but were dragged past the 67 Kenya made against Ireland in 2008 by Steven Finn and Jade Dernbach.

This only served to delay the inevitable, as England's humiliation was complete when Dernbach was run out by Lakshmipathy Balaji's throw from short fine leg.

It was a dismal end to another one-sided World T20 contest, with the margin of India's victory seemingly unlikely when they posted a total that was only five runs more than the average first-innings score at the R Premadasa Stadium.

Dhoni's side looked to be running away from England when Gautam Gambhir and the impressive Virat Kohli put together a stand of 57, but their progress was checked by Swann, who had Kohli caught in the deep in the final over of his spell.

From there, Sharma took the attack to England, hitting the only six of the innings as Dernbach conceded 17 from the final over.

That looked to be enough to tip the balance in India's favour, but the truth was they already had far too many for England.

They will have three days to regather before taking on West Indies or Ireland in the Super Eights on Thursday.