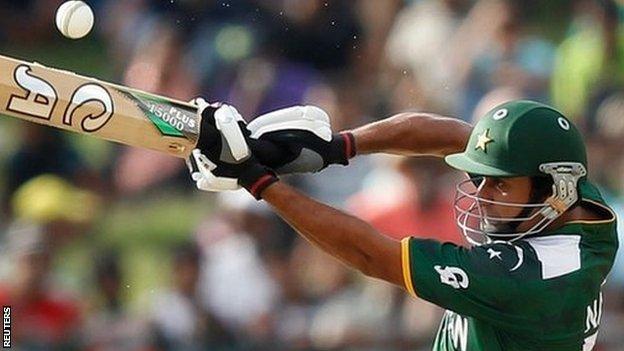 After a 47-run opening stand between Mohammad Hafeez and Imran Nazir, 22-year-old Jamshed struck four sixes in his 56 to propel Pakistan to 177-6.

Ross Taylor kept the game alive into the final over, but Saeed Ajmal (4-30) ensured the Kiwis fell short on 164-9.

Despite the loss, New Zealand progress to the Super Eights on net run rate.

Whatever the result of Tuesday's meeting between Pakistan and Bangladesh, New Zealand's score of +1.150 cannot be overhauled by both teams.

Pakistan will be certain of joining the Black Caps in the last eight with a victory over the Tigers, and on this evidence Hafeez's side have all the weapons required to recapture the trophy they won at Lord's in 2009.

The match could have taken a different course had New Zealand skipper Ross Taylor taken a routine slip chance to remove his opposite number Hafeez for nought in the first over.

Hafeez responded by smashing Daniel Vettori for six off the eighth ball of the match to set the tone for a rampant Pakistan batting display.

Nazir hit five fours in a quickfire 25, but the arrival of Jamshed proved the real catalyst as the left-hander reeled off some superb shots on both sides of the wicket.

Playing with a confidence that belied his age and experience, Jamshed smashed four sixes and two fours to reach fifty off 27 balls.

Jamshed and Hafeez fired Pakistan to 123-1 in the 14th over, only for three quick wickets to check their progress.

Most sixes at ICC World T20

With the scoring rate slowing, Pakistan were in danger of undoing the good work of their top three, but Umar Akmal (23) and Shahid Afridi (12) gave the total a late boost with some lusty blows late in the innings.

The New Zealand reply was given the ideal platform as openers Rob Nicol and Kane Williamson put on 53 for the first wicket in 6.4 overs.

But Afridi broke the partnership when he surprised Nicol with a quicker delivery and Williamson was run out soon afterwards following some sharp work from Jamshed in the field.

Brendon McCullum, who struck a brutal 123 off 58 balls against Bangladesh in New Zealand's first game, was tamed by some miserly bowling from Hafeez, and a decision to move Daniel Vettori up the order backfired when he could only muster 18 off 16 balls.

When McCullum was bowled by Umar Gul for 32 shortly afterwards, New Zealand were way off the pace, but a flurry of boundaries from James Franklin and Taylor revived their hopes.

Taylor was run out for 26 off 11 balls to leave 19 needed off the last over, but Ajmal struck twice to remove Tim Southee and Nathan McCullum as Pakistan closed out the match.