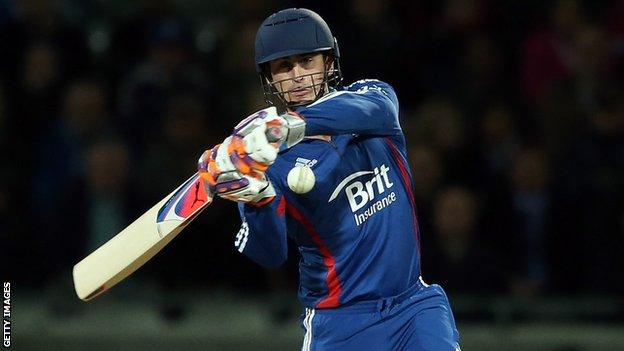 Opener Craig Kieswetter says defending champions England must be more "streetwise" in the latter stages of the World Twenty20 tournament.

On Sunday, they fell to their lowest total and heaviest defeat in the 20-over game as they lost to India.

"You've got to be more streetwise, be prepared to score ugly runs," the 24-year-old said.

"England's batsmen were like rabbits in the headlights against the Indian spinners and there were some very worrying signs as we look ahead to the Super Eight phase of the competition. Their opponents will be aware of their weakness against spin bowling and will prepare accordingly."

England had already qualified for the next round, and play the first of three Super Eight games on Thursday.

Andy Flower's side progressed thanks to a crushing 116-run win over Afghanistan in their opening fixture, an opponent India had struggled against.

They will next face West Indies in Pallekele, with hosts Sri Lanka and New Zealand also waiting in Group E.

"What's done is done; we did what we needed to do and qualified - and now we're through to the business part of the competition," Kieswetter said.

"Now you'll see the good teams put their hands up and actually put up performances that really matter.

"It was a disappointing performance - we're human enough to say that and realise that obvious fact."

Wicketkeeper-batsman Kieswetter's top score of 35 runs was almost three times more than any total his team-mates registered in Sunday's defeat, as England's frailties to spin were exposed again as Harbhajan Singh and Piyush Chawla helped bowl them out in just 14.4 overs.

The capitulation brought back memories of England's whitewash defeat to Pakistan in the New Year when right-arm offbreak bowler Saeed Ajmal took 24 wickets in three Tests.

Luke Wright: "Sorry to the fans for a terrible batting performance! One bad game, we will bounce back! Thanks to everyone who is still right behind us!"

Tim Bresnan: "Apologies to the England faithful supporters. That wasn't our best game. We will bounce back stronger I'm sure."

Captain Stuart Broad moved quickly to dismiss the idea that his team's batsman have a weakness against spin bowling, and Kieswetter backed his captain's opinion.

"It was just a bad performance. We're not getting too down about it.

"Confidence is still high; we're still playing some great cricket and we're pretty glad we've got that game out of the way at the best time possible.

"We've got to be adaptable to the wickets. Last night didn't really turn much, and we played across the line a bit too much.

"We should have played a bit straighter. We realise that; we've highlighted it and we're obviously going to learn from that."