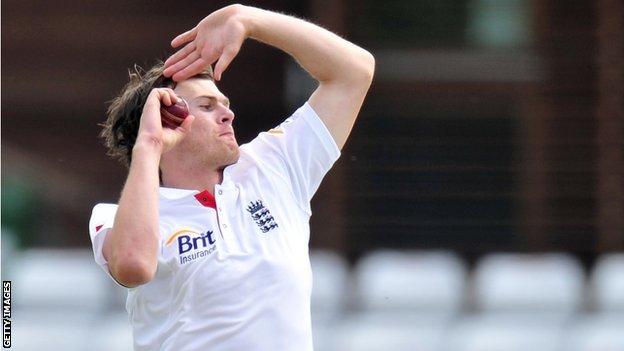 The 22-year-old seamer has impressed for England Lions and is part of the England Performance Programme.

But Harris believes that the greater competition in County Championship Division One will help him improve his own game and put him in the spotlight.

"The biggest reason for the move was... to progress in my own career, I'm a very ambitious bloke," Harris said.

"I couldn't handle potentially not achieving what I set out to and I'm very hopeful in the next couple of years I can... really progress in my game and push for full international honours.

"The selectors said it wouldn't make any difference in their personal thinking if I was to stay and play my cricket at home in Glamorgan.

Since starting my career at Pontarddulais Cricket Club, I never thought at the time that I'd have the chance to play at Lord's

"I felt... a big thing for me was playing Division One cricket. They said it wouldn't matter if I stayed in Division Two, but I think that playing cricket in Division One, there's more big games all the way through the season at both ends of the table.

"With [England] sides being picked come the end of the season, I need to be playing in the highest profile games I possibly can be to give myself the best chance."

Harris, who averages 27.60 with the ball and a useful 21.27 with the bat in first-class cricket, is excited by his new life at Middlesex, but admits it was a wrench to leave Glamorgan.

"After a lot of careful deliberation and quite a few sleepless nights, I'm very happy with the decision," Harris added.

"Firstly, to have the opportunity to work with Richard Johnson as bowling coach, and obviously Angus Fraser is the director of cricket, was hugely appealing.

"And to be able to call Lord's home and play my cricket there was something I couldn't pass up really.

"It's an incredible opportunity for me and since starting my career at Pontarddulais Cricket Club I never thought at the time that I'd have the chance to play at Lord's, let alone play there most weeks as a home player.

"That was something that excited me greatly and walking through the Grace Gate on a very sunny day when I went to meet with them... it just made me very, very excited."

Harris, who enhanced his growing reputation with a six-wicket haul against Australia A at Edgbaston in August, has been selected in the England Performance Programme squad to tour India in November.