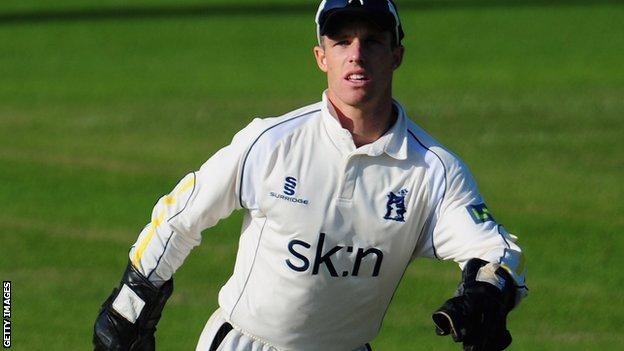 Warwickshire reserve wicketkeeper Richard Johnson has left the county champions to head off in search of regular first-team cricket with promoted Derbyshire next season.

After two loan spells at Derby this summer, Johnson has signed a three-year deal to make the move permanent.

"But it's sad to lose such a talented home-grown player who is very popular."

Solihull-born Johnson returns back up the A38 to the East Midlands having made cricketing history this summer.

Hopefully I'll be in the team when Derbyshire go to Edgbaston next summer. The Warwickshire boys are already telling me they'll be getting stuck into me

He played three matches for Warwickshire as they won the County Championship for the first time in eight years.

But he also played a small part in Division Two champions Derbyshire's title triumph, having also played in two of their four-day games, as well as further endearing himself to the locals with a match-winning 79 to beat neighbours Yorkshire in the CB40 in mid-July.

"I've got my medal from Warwickshire as I played three games for them," Johnson told BBC Sport. "But I'm still waiting to find out if I get anything from Derbyshire.

"I've been told that you have to have played three matches, in which case I'd miss out.

"But it was just nice to have been part of it.

"It certainly made for an interesting second half of the season. I was all over the place with all the travelling and the swapping about from one division to the other."

Johnson, 24, twice joined Derbyshire on loan, only to twice be recalled by the Bears to stand in for the injured Tim Ambrose.

He then cruelly missed out on a Lord's final when the Bears' first-choice keeper Tim Ambrose recovered from a freak groin injury to be fit in time for that thrilling last-ball CB40 defeat by Hampshire.

But Johnson was on the winning side for the Bears in the 2010 CB40 final at Lord's. And, with a gleaming new championship medal now in his kitbag too, despite leaving behind his boyhood heroes, he is adamant that he has made the right career move.

"It was a tough decision to make," he said. "But one I couldn't turn down. The club have great ambitions to build on last year's promotion.

"I'm very proud to have progressed through the Warwickshire ranks from a junior to a member of the full squad. And I'm leaving with many happy memories.

"And hopefully I'll be in the team when Derbyshire go to Edgbaston next summer. The Warwickshire boys are already telling me they'll be getting stuck into me and it's certainly a fixture I'll be looking out for when they come out."