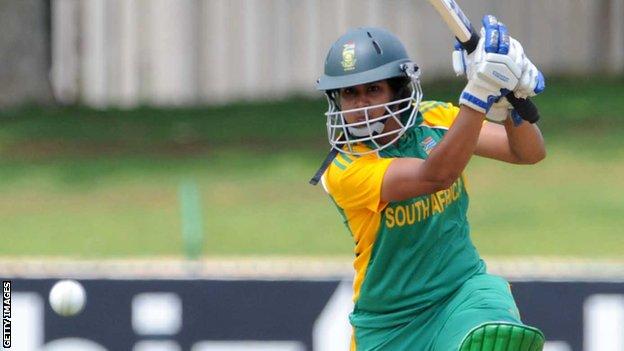 South Africa beat hosts Sri Lanka by six wickets in the opening match of the Women's World Twenty20 in Galle.

Susan Benade took 2-7 and Dane van Niekerk 2-9 to help bowl Sri Lanka out for 79, a total overhauled with 2.4 overs to spare.

England, winners of the inaugural title in 2009, begin their Group A campaign against Pakistan in Galle on Thursday.

Sri Lanka, having lost the toss, suffered the worst possible start to the tournament as they slipped to 17-4 and then 35-6.

Dilani Manodara led the limited resistance with 24 off 35 balls, but Sri Lanka were undermined by five run-outs, the last of which came off the final ball of their 20 overs.

South Africa completed a modest chase with ease as captain Trisha Chetty made 33.

New Zealand, runners-up in both previous editions of the World Twenty20, were limited to 117-9 by West Indies, thanks largely to two wickets apiece for Stafanie Taylor, Anisa Mohammed and Shemaine Campbelle. Suzie Bates, who made 32, was the only batsman to pass 15.

The Windies slipped to 5-2 in reply before Taylor and Deandra Dottin repaired the damage with a third-wicket stand worth 82.

Taylor fell for 35 but Dottin - - finished unbeaten on 58 off 42 deliveries as victory was completed with two overs in hand.