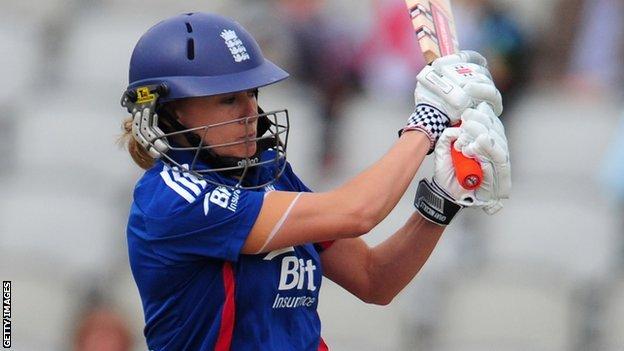 Laura Marsh hit a Twenty20-best 54 from 41 balls as she put on 102 for the first wicket with Charlotte Edwards, who scored 45 from 43 deliveries.

England went on to lose six wickets for 31 runs, as they were restricted to 133 off their 20 overs.

"It was an emphatic margin of victory. The only concern for England will be a collapse against spin in the second half of their innings, which could have proved costly against stronger opposition.

"Laura Marsh was player of the match for her career-best 54 off 41 balls.

"England will have tougher group games to come against India and Australia, with the top two going through to the semi-final."

But Holly Colvin took 4-9, including wickets from successive balls, as Pakistan were bowled out for 90.

"We could've got a few more runs, but it's a results business," said captain Edwards, who will lead her side out against India on Saturday and then Australia on Monday.

"We'd have expected to get 150-160. It's nice to learn key things and today that's the middle overs and how we play the spin."

"I think we went about it the right way, but maybe didn't quite execute it as well as we'd like in the middle. We've got a lot to improve on for the next game."

England, champions in 2009, made a blistering start, with Marsh and captain Edwards taking them past 100 in just 76 balls.

But both succumbed to run outs before Pakistan tore through England's middle order. Arran Brindle was the only other England player to reach double figures, scoring 12.

Spinner Danielle Hazell took two wickets to stunt the Pakistan reply, while Colvin's best ever T20 figures, including consecutive dismissals of Nida Dar and Marina Iqbal, eased England to a comfortable victory in Group A.

Australia chased down the target of 104-8 set by India to win their Group A match in Galle by eight wickets, with 16 balls in hand.