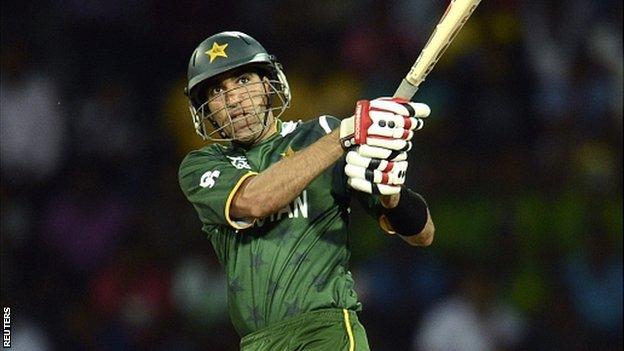 Umar Gul blasted 32 off 17 balls as Pakistan fought back to sneak a two-wicket victory over South Africa in the Super Eights of the World Twenty20.

When he came to the wicket, Pakistan appeared doomed with 58 runs needed off 33 balls and three wickets in hand.

But Gul's cameo catapulted them back into the game and although he was out with one over left, Saeed Ajmal hit the winning runs with two balls to spare.

Pakistan's spinners had limited South Africa to 133-6 on a turning track.

It was a total which Pakistan would have expected to chase down with ease following dominant batting displays in their two group games.

Most wickets at World T20

But a gung-ho approach cost them dearly as they crumbled to 76-7 in the 15th over.

Gul, a number nine with a previous Twenty20 average of nine from 19 innings, started the rally by heaving Jacques Kallis high into the stands over deep square leg before launching the next ball over long-on for another six.

The next over, delivered by Albie Morkel, cost 20 runs, as Umar Akmal smacked the first ball for four before Gul plundered 12 off the last three.

Dale Steyn gave South Africa hope with a tight penultimate over, conceding only six runs and having Gul caught on the rope off the last ball to leave Pakistan needing nine to win from the last over.

But when Morne Morkel served up a leg stump full toss, Akmal took full advantage to clear the ropes with a hard, flat pull.

A single gave the strike to Ajmal, with two needed from three balls. He only needed one, though, as a thick edge raced away to the ropes.

"Umar Gul brought out something special for Pakistan," said captain Mohammad Hafeez. "I knew he can hit the ball hard. He showed character today.

"Even if it's not with his bowling, he can still contributefor the team. It's a very good sign for us."

Earlier, South Africa, comprehensive winners over Zimbabwe and Sri Lanka in the group stage, faltered from the start against Pakistan's rich and varied attack.

An out-of-sorts Hashim Amla had already been dropped twice and was almost stumped when he slapped Yasir Arafat straight to Shoaib Malik at cover point in the second over.

"Pakistan have absolutely stolen this game. But credit to them, they have kept going. It was inexplicable that Morkel bowled that knee-high full toss that was hit for six, that was the one ball he couldn't have bowled."

With Pakistan's four spinners going through their repertoires on a receptive pitch, the Proteas struggled to find any fluency with the bat.

Richard Levi and Kallis both fell cheaply - to Ajmal and Mohammad Hafeez respectively - during an opening 10 overs which featured 31 dot balls and only 47 runs.

While JP Duminy battled hard to get South Africa back in the game, the decision to send Farhaarn Behardien in ahead of captain AB De Villiers backfired as he scratched around for 18 off 21 balls.

After finally entering the fray in the 13th over, De Villiers added late impetus with 25 off 18 in a 44 partnership with Duminy which just about hauled South Africa to a competitive total.

Pakistan set about their task in aggressive mode with four boundaries in the first two overs, before coming unstuck with three soft dismissals in a row.

Imran Nazir was caught behind, gloving a Dale Steyn bouncer down the leg side, before Hafeez and Nasir Jamshed were both stumped trying to smash Robin Peterson out of the ground.

The rot continued as Johan Botha pegged back Kamran Akmal's off stump to leave Pakistan reeling on 37-4.

Shoaib Malik and Umar Akmal endeavoured to repair the damage but it came at a cost as the scoring rate slowed dramatically.

By the time Shoaib was caught on the boundary the required run rate had shot up to over nine per over and Shahid Afridi plunged them further into the mire by drilling his first ball to long-off.

At that point, Pakistan appeared to have engineered their own downfall, only for Gul and the cool-headed Akmal (43 not out) to conjure up a memorable finale.

"I'm proud of the way the boys fought, said De Villiers. "We were pretty much out of the game in the first ten overs and it was very tough to fight back but we did. We competed playing at 80%.

"We certainly can win the next two," added De Villiers. "We can only get better. If we get it right in the next game we will win both."