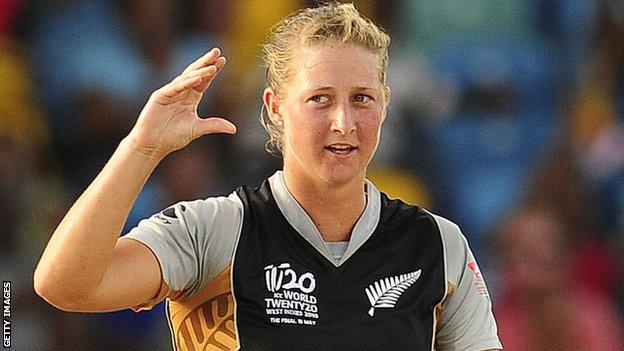 New Zealand and Sri Lanka recorded victories at the Women's World Twenty20 in Galle to throw Group B wide open.

And there was an upset as hosts Sri Lanka took advantage of a West Indies batting collapse to win by five runs on the Duckworth-Lewis method.

The results leave all four teams level on points going into the final round of group matches on Sunday.

The top two teams in the group will go through to the semi-finals.

New Zealand, who suffered a surprise defeat against the West Indies in their opening match, hit 151-5 against South Africa, helped by Devine's first international T20 half-century.

Their opponents were restricted to 129-9 in reply as Nicola Browne took 3-13.

The group's other match, which was interrupted by rain, had a dramatic finish after Sri Lanka scored 50-3 in 10.3 overs.

West Indiesneeded 48 runs in eight overs to win, and looked to be well on course.

But with just 12 runs required from the final 12 balls, they fell short as Chamani Seneviratna took two wickets.

England will look to take a major step towards qualification for the semi-finals from Group A when they face India in Galle on Saturday.

Laura Marsh top scored with 54 as England recorded a comfortable 43-run win over Pakistan in their opening match on Thursday, while captain Charlotte Edwards hit 45.

India, who opened with an eight-wicket defeat against Australia, lost both Twenty20 internationals they faced against England in June.

"We've seen a lot of them in recent years and beat them 2-0 in a Twenty20 series in England over the summer.

"We certainly won't be underestimating them. We know how they play but we'll be sticking to our gameplan and hopefully getting another win."