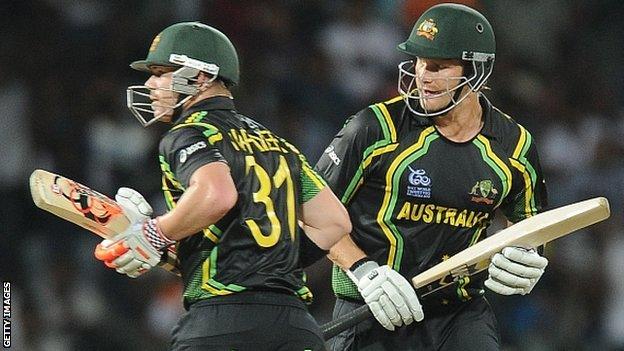 Shane Watson and David Warner both blazed fifties as Australia thrashed India by nine wickets in the World Twenty20 Super Eights in Colombo.

The openers hit 10 sixes and put on 133 for the first wicket as they took apart the spin attack that destroyed England.

Australia are ranked seventh in the International Cricket Council's standings and were expected to struggle at the tournament.

But after overpowering Ireland and the West Indies in their group and humiliating India, they have established themselves firmly among the favourites.

Their opening partnership is the most destructive and prolific in the game - with a record 1,077 runs in the format - while Watson's all-round displays have earned him the man of the match award in all three games.

He has taken the most wickets in the tournament (eight), has hit more sixes (13) than any other player and is second only to New Zealand's Brendon McCullum in the run-scoring charts.

"The last couple of games have been pretty good, hopefully it can continue for a few more games," said Watson.

"The batting is probably more satisfying when it's two of you against 11, but it's good to be an all-rounder when you can be involved in the game."

His latest demolition job began in the fifth over of Australia's run chase when he planted two Ravichandran Ashwin long hops into the stands.

A different spinner brought an identical result with Piyush Chawla twice smashed over the ropes before Warner deposited successive balls from Harbhajan Singh for six in the following over.

These were the same spinners who had taken a combined 6-25 in eight overs against England on the same ground, but they were being made to look like village cricketers by Australia's opening pair.

Captain Mahendra Dhoni searched far and wide for inspiration, deploying eight different bowlers, but the scoring rate never slowed as Watson helped himself to 19 off an Irfan Pathan over and clobbered Virat Kohli's medium pace for another maximum.

The finish line was in sight when Watson punched Yuvraj Singh to short extra cover to give India their only wicket.

Australia chose to give 23-year-old all-rounder Glenn Maxwell the opportunity to boost his confidence by striking the winning runs and he duly obliged by driving Ashwin through the covers to round off the most comfortable of wins.

"We keep talking about our middle order not getting a hit but we'll deal with that when we have to if our openers are going to bat as well as they are," said Australia captain George Bailey.

"It's not a problem that you wouldn't want to have."

The heavy defeat leaves India, who omitted Virender Sehwag from their line-up against Australia, needing to beat archrivals Pakistan on Sunday to keep their chances alive.

The scale of their loss was all the more staggering given that India had charged to 56-1 in seven overs after winning the toss.

When Virat Kohli skied Pat Cummins to mid-off when on 15, however, it sparked a collapse from which they never truly recovered.

And it was left to Suresh Raina (26) and Ashwin to ensure India reached an adequate score, the latter hitting Starc for a huge six over midwicket on his way to 16 not out from 12 deliveries.

After the match, Raina told BBC Sport he would like to see the mercurial Sehwag recalled for the Pakistan match.